As the long, hot, summer of 1939 drew to a close, Adolf Hitler, Chancellor of Germany, was determined to have his war.

True, he had accomplished his previous exploits—the re-militarization of the Rhineland; the annexation of Austria; the absorption of the Sudetenland; and the occupation of Czechoslovakia—all without firing a single shot.

But Poland, Hitler’s next target, backed by France and Great Britain (which had pledged their support), had by now learned that Hitler’s promises were worthless.  Poland resisted his demands for concessions and ignored his professed desire for “peaceful coexistence.”

For his part, Hitler was not daunted by the prospect of war. In fact, far from it; he welcomed the chance to show what his army, navy and air force, built with so much national effort and sacrifice, could do.

Hitler had just one scruple, however.  He could not simply invade Poland without a casus belli—a justification. [By the following year even this scruple disappeared when Germany, without cause, invaded Norway, Belgium and the Netherlands, all of which were neutral, as well as Denmark, with which Germany had recently signed a nonaggression pact.]

Hitler had already ordered his armed forces to be ready to invade Poland by September 1, but Poland was stubbornly refusing to play along.  Accordingly, Hitler decided to manufacture his own casus belli.  As he told his generals on August 22: “The victor will not be asked whether he told the truth.”  The SS were instructed to make it appear that Poland was attacking Germany.  Not taking any chances, the SS planned more than one provocation.  For example, SS men, dressed in Polish uniforms, attacked a German customs post, firing shots in the air and leaving behind six corpses—all prisoners taken from Dachau—also dressed in Polish uniforms.

Another provocation was chosen for Gleiwitz, a German town located four miles from the Polish border.  Gleiwitz did not have much going for it, except good railroad connections, and a 365-foot wooden radio transmitting tower—the tallest wooden structure in all of Europe.

At 8:00pm on Thursday, August 31, the SS struck.  As historian Roger Moorhouse writes in his latest work, Poland 1939, the time had been chosen 1) to provide the cover of darkness, and 2) because many people would be listening to their radios at that hour. The SS team quickly overran the radio station, herded everyone into the basement, seized the microphone, and broadcast the following message in Polish:

To add verisimilitude to their “attack” the SS had the day before picked up Franciszek Honiok, an ethnic Pole who was nevertheless a German citizen.  Not only was Honiok ethnically Polish, he was widely known for his Polish sympathies.  The unsuspecting Honiok was brought to Gleiwitz, and on the evening of August 31, his drugged body was delivered to the radio station, and there he was executed in cold blood and left behind as “evidence.”

For unknown reasons, a much longer message was not broadcast as planned that evening, and even what was announced could barely be heard over the radio.

Nevertheless, the German press, which was no longer free and independent, no longer able or willing to speak truth to power, but merely served as a propaganda arm of the Nazis, was already primed to flood German streets the morning of September 1 with headlines castigating Poland for its dastardly acts.  In a 5:45am proclamation to his troops as they headed east, Hitler concluded: “there remains no other recourse for me but to meet force with force.” 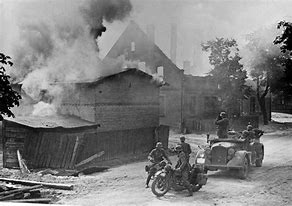 Hitler now had his war, or more precisely, as William L. Shirer noted, his “counter-attack.” And what a counter-attack it was, involving 1.5—2 million men, over 2,000 planes, and nearly 3,000 tanks.  Jan Karski, a Polish Mounted Artillery officer (and future professor of mine at Georgetown), recounts in his memoir: “[On that first morning] the extent of the death, destruction and disorganization this combined fire caused in three short hours was incredible.  By the time our wits were sufficiently collected to even survey the situation, it was apparent that we were in no position to offer any serious resistance.”

On that same hot sunny morning of September 1, Thomas Buergenthal and his parents were less than 20 miles away from Gleiwitz, having just boarded a train in Katowice, Poland en route to England.  But as Moorhouse notes, the Luftwaffe launched over 2,000 sorties on the first day alone, “strafing . . . at will.”  Tommy’s train was attacked and disabled, and his family’s dreams of freedom were, in his words, “not to be.” 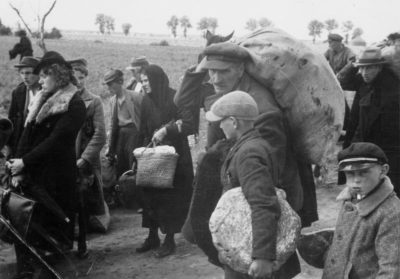 Refugees on the move

Young Tommy would ultimately have another, closer, encounter with Gleiwitz nearly five and a half years later.  In late January, 1945, Tom and his column of prisoners marched—shuffled really—out of the front gates of Auschwitz-Birkenau and onto the backroads of Poland.  Their goal: Gleiwitz, 42 miles away.  Even now, it is impossible to adequately describe the agony of that three-day trek.  According to Odd Nansen, the temperatures hovered around 10° F. and many froze to death along the way, or were shot if unable to continue.

Somehow, Tom made it to Gleiwitz, but that merely meant that the second stage of his terrible odyssey was to about begin: ten more days in an open cattle car headed for Sachsenhausen.

History offers many unexpected twists and turns, often heavily laden with irony.  But perhaps none so ironic as this: Germany’s Gleiwitz is today Poland’s Gliwice.  Millions of deaths later, at the Potsdam Conference of 1945, the postwar boundaries of eastern Europe were redrawn, and Gliwice found itself for the first time located within Poland.