Not long ago I wrote about a book that was only recently rediscovered and republished—dealing with an Arctic expedition (here).

I have just finished reading another treasure that lay dormant for many years: A Bookshop in Berlin, a memoir written by Françoise Frenkel.  Frenkel, born Frymeta Idesa Frenkel, was a Polish Jew who studied at the Sorbonne in Paris.  As a young woman she decided to combine her two greatest loves—that of books and that of all things French, and open a French bookstore.

Originally, Frenkel hoped to open her new bookshop catering to French literature in her native Poland.  Unfortunately, the Polish cities she visited all already had a French bookstore.  Dejectedly returning to France, she stopped en route in Berlin and discovered, to her amazement, that Germany’s capital city was devoid of virtually anything French (the ink on the Treaty of Versailles, ending WWI, was still barely dry at the time).

Following Kristallnacht (her shop was miraculously spared) Frenkel could see the writing on the wall.  Months later she fled Berlin for the safety of Paris, abandoning all she had worked for for decades.

Frenkel’s reprieve was short-lived.  Less than a year later (May, 1940) Germany invaded, and quickly conquered, France. Frenkel fled south, to the unoccupied zone.

Here the memoir really picks up speed, as Frenkel recounts the increasingly draconian measures Vichy France imposed on refugees in general, and Jewish refugees in particular.  Emigration is virtually impossible.  Roundups become ever more frequent and brutal. “Police and gendarmes were on the hunt, displaying inexhaustible levels of skill and energy.” Frenkel barely escapes each roundup, witnessing horrifying scenes of cruelty in the process.  It seems like it is only a matter of time before she will be caught in the dragnet.  Escape to Switzerland is the only option.

After two escape attempts fail (one of which lands her in prison for a spell), Frenkel finally succeeded, in June, 1943.  She immediately began writing her memoir, which she titled Rien où Poser sa Tête [No Place to Lay One’s Head.] It was published in Geneva in 1945, but thereafter languished in obscurity until an old copy was discovered at a charity rummage sale.  The memoir was reissued in France in 2015, 70 years after its first appearance, and translated into English two years after that. 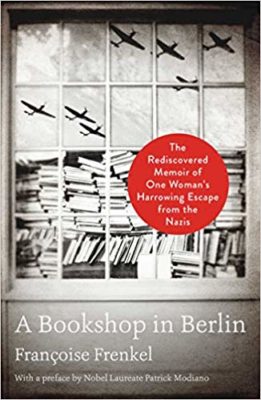 Of Frenkel’s postwar life virtually nothing is known.  She died, in Nice, on January 18, 1975, age 85, apparently without heirs.

The memoir is well worth reading (you won’t miss much if your skip the preface written by Patrick Modiano).

Is there a Nansen connection?

Of course there is!

Frenkel’s husband, Simon Raichenstein, who was born in Russia in the late Nineteenth Century, fled Berlin in 1933 for Paris, using a Nansen Passport (you can read more about the Nansen Passport here).*

But there is even a deeper connection with Nansen—a spiritual connection.  Following one particularly harrowing episode, Frenkel finds some temporary safety with close friends. She writes:

“At the sight of these two [friends], and their evident loyalty, I dissolved into tears. My disappointments, my bitterness, all of it vanished, erased by an immense feeling of gratitude.  They too seemed moved, for however great the joy of being saved, even greater must be the joy of those noble souls who come to the aid of a human being in distress.”

Today, January 13, marks the 78th anniversary of Odd Nansen’s arrest.  Three and one-half years of suffering—physical and mental—lay ahead.  But Odd Nansen never let that prevent him from nobly aiding other human beings in distress whenever he could.

Without knowing it, Francoise Frenkel’s observation paints a precise and accurate picture of a man she had never met and would never meet.

*For reasons which will likely remain forever a mystery, Frenkel never once mentions her husband in her memoir.  Raichenstein was rounded up in Paris in July 1942, and died one month later in Auschwitz-Birkenau.