As dates go, the first two days of August 1944 seem to me unusually fraught.  Many things changed irrevocably—most for the worse, only a few for the better.

On Tuesday, August 1, 1944, Anne Frank wrote in her diary to her imaginary friend Kitty.  To Kitty, and only to Kitty, could Anne confide all of her thoughts, longings, and emotions without fear of being judged.

On that day Anne tried to explain to Kitty about the “bundle of contradictions” that made up her nature.  She felt her exterior of exuberant cheerfulness, flippancy even, hid an interior self: “much purer, deeper, finer.”  This “deeper” Anne, however, shrank from exposing itself to others.  The real Anne could only be herself when she was alone.  She wanted to show this inner self—the quiet and serious Anne—but could not yet overcome this difficulty.  Her diary entry ends: [I will] keep trying to find a way to become what I’d like to be and what I could be . . . if only there were no other people in the world.”

Unknown to Anne, this was to be her final entry.  Three days later, on August 4, Anne, her family, and their friends were betrayed and arrested by the Gestapo.

No doubt hope sustained Anne during her ordeal, first in a transit camp, then in Auschwitz, and finally in Bergen-Belsen.  No doubt she hoped that she would one day be reunited with her precious diary.  Nevertheless, within six months Anne would perish, age 15.  Only her diary survived to reveal to the world her “purer, deeper, finer” self. 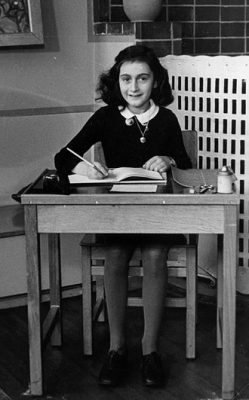 On Wednesday, August 2, 1944, as the ink dried on Anne’s final diary entry, Thomas Buergenthal and his parents arrived by train in Auschwitz, the largest and deadliest camp the Nazis ever built.  Approximately 1.3 million people were murdered there, of whom approximately 1.1 million were Jews.

It’s doubtful if either Tom or his parents grasped at that moment the true horror of Auschwitz, the industrial scale of its gas chambers and crematoriums.  Prior to arrival, “I could not quite imagine what Auschwitz was really like,” Tom admits in his memoir, although he knew it was a place of dread.

Tom soon learned that his experience in Auschwitz would be very different.  Unlike his previous life in the Kielce Ghetto and in various work camps outside Kielce, his family would no longer remain intact.  Upon arrival he was immediately torn from his mother.  Except for a single brief glimpse of her through the wire—hair shorn, tear-stained, but alive—ten-year old Tommy would not see his mother Gerda for almost two and a half years.  Then, less than three months after arrival, Tom was also separated from his father.  Mundek was sent, first, to Sachsenhausen and later to Buchenwald.  There he died of pneumonia on January 15, 1945, less than 90 days before the camp was liberated.

What kept Tom going through all this?  True, he was ein Glückskind—a lucky child—helped by many, even in Auschwitz.  But what thoughts kept him from despair as he struggled to survive, alone?  As he explains in his memoir, while living in an orphanage after the war, and despite all indications to the contrary, “I continued to believe, without telling anyone, that my parents were alive and would find me one day soon.”  Hope kept despair at bay.

Tom Buergenthal with his parents

Finally, on August 1, as Anne Frank penned her final diary entry, and as Tom was about to enter Auschwitz, the Polish underground in Warsaw staged a revolt.  The insurgents hoped to both drive the Germans from the city, and establish control over Poland’s capital before the Soviet-backed Polish Committee of National Liberation arrived.  Initially, the underground succeeded in establishing control over much of central Warsaw.  Nevertheless, the Soviet army, which occupied the eastern bank of the Vistula River, and thus Warsaw’s eastern suburbs, rendered no assistance. This cold-blooded decision by Stalin has since been called “one of the major infamies of th[e] war.”

Ultimately, the outgunned and outmanned uprising was brutally crushed.  Over 16,000 resistance fighters were killed, as were between 150,000—200,000 Polish civilians.  Many were victims of mass executions by the German Army.  Most of the remaining population was sent off to concentration camps, including Sachsenhausen, as witnessed by Odd Nansen on August 15, 1944 and December 13, 1944.  The city was not liberated until January 17, 1945. 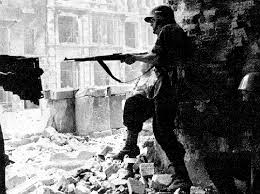 In sum, in the first days of August, 1944, an unsuspecting Anne Frank poured her heart out to her diary, which would survive even if she did not.  Tom Buergenthal passed through the gates of hell, but inexplicably survived.  The Polish underground was crushed, but its tormentor, Nazi Germany, ultimately went down to total, ignominious defeat.  Poland did not see real freedom for decades.

All of these participants faced despair in early August, but all were motivated by hope.  Indeed, hope may have been the most powerful weapon they could wield.  For some it was enough; for others it fell short.  Memories of August 1-2 will always remain bittersweet.