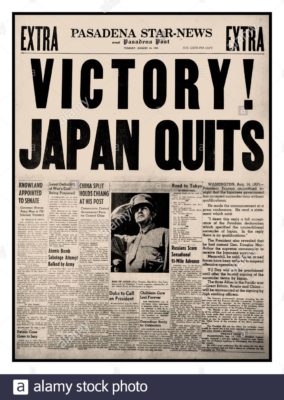 Seventy-five years ago today, World War II ended with the surrender of Imperial Japan.  The following day, the Japanese Emperor’s voice, heard by the country’s inhabitants for the first time, concluded that “the war situation has developed not necessarily to Japan’s advantage.”  Therefore, “we have resolved to pave the way for a grand peace for all the generations to come by enduring the unendurable and suffering what is insufferable.”  The formal surrender occurred on September 2, 1945 aboard the USS Missouri. 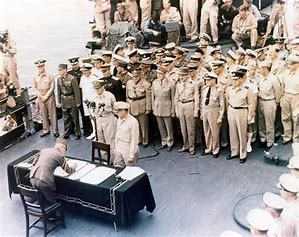 With the hindsight of 75 years, it all seems somewhat predictable.  After all, how did Germany, Japan, Italy and their lesser allies ever think they could defeat the combined might of the United States, the Soviet Union and Great Britain?

And, in a very real sense, every history book written since August 1945 (and there have been many—more ink has been spilled about World War II than probably any other subject) is predictable. Of the trillions of facts to sift, and the billions of causal events to examine, even the best historian, knowing how the final chapter ends, consciously or unconsciously chooses those facts and events that point to and support the inevitable conclusion.  Thus we get narratives such as: “Although the Allies went down to defeat in the Battle of XXXX, they learned valuable lessons that would help turn the tables in their next encounter.”  Or: “Although it looked as if the Nazi war machine would triumph, a closer look at these five factors reveals that they were in fact ultimately doomed.”

The only way to really experience the war as it occurred is to study the words of its participants as it occurred.  This is why diaries—of Odd Nansen, Anne Frank, William L. Shirer, and many others, are so critical.  They didn’t, and couldn’t, know how or when or in what way the war would end.  [Another great resource is the Library of America’s two-volume Reporting World War II, which chronologically arranges reports by journalists such as Pyle, Morrow, Hersey, Shirer, et al, as the war unfolds.]

So, I will now let William L. Shirer have the last words on August 14, 1945, drawn from his book End of a Berlin Diary.  The eloquence, uncertainty, hope (there’s that word again), and poignancy of his thoughts written on that day are particularly compelling:

“World War II is over!

In the excitement of our victory tonight, in the joy and relief, it was difficult to remember the dark days when defeat stared us in the face and catastrophe was staved off by only the narrowest of margins.  It was utterly impossible for more than a handful this night to recall, as I had done a time or two in Germany when the triumph of the Nazi barbarians seemed so certain, what the awful consequences would have been for us had victory not come in the end. . . .

Now the desperate and the heroic days are over.  Peace will be sweet, yes; but the adjustment to it will take some time, and no doubt it will bring much disillusionment as imperfect little men try to repair the unspeakable damage—physical, moral, spiritual.  There will have to be adjustment too for those of us who have lived little else the last ten years but the tense fight against the barbarism of the Nazi and Fascist world.  The tensions of that epic struggle have been in my blood for so long, conditioning whatever I did or thought or was, that it will take time and effort and great relaxation to get them out of my system so I can begin anew. . . .

We kept on broadcasting until about two thirty a.m., weary and exhausted and yet, deep down, exhilarated by this immense day.  Afterward there were drinks and food in the back room of the little pub below with those who had toiled both here and in the war’s midst to bring to our fellow men the facts and the background and the smell and the sound and the fury of this gruesome holocaust which had come to its bloody end this night.  God, how long and wretched and inhuman it has been!

When I stumbled down Fifty-first Street toward home, the summer’s sun was coming up beyond the East River, rising on this first day of peace.” 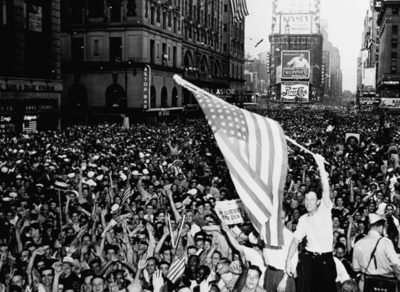 [Like Shirer and his contemporaries during the war, we don’t yet know when or how our current battle with a deadly and mysterious virus will end.  Let’s hope we can soon feel the way Shirer did on that bright new morning 75 years ago.]