Nansen would next see his wife Kari when she visited him in Grini prison a few weeks later, on August 20, 1943.  Soon thereafter, he quickly found himself in hot water with the camp commandant, and just as quickly found himself on the next transport to Sachsenhausen.  He would not see Kari again for almost two years, until June 9, 1945.

In the years since I first started writing blogs, I have of course written extensively of Odd Nansen and his diary. What I have not done, however, is write about his wife Kari.

This is quite an oversight.  After all, Nansen makes clear in his Foreword that “I was writing [the diary] for my wife, to let her know what was happening and how I was getting on.”  Fully 135 entries mention her by name, more than anyone else in the diary.  As Nansen confesses: “[A] prisoner thinks a very great deal about his wife.. . . “  Those 135 entries represent over one-fifth of all the entries Nansen wrote, at least in the English version.  Another 100 or so entries were cut out when the diary was translated from Norwegian.  And even in the Norwegian version, Nansen admits, about two-thirds of what he wrote was never published: “most of the private matter has been cut out.”  One can only guess, therefore, at the full extent of Kari’s presence in the diary.

Whatever the extent, it’s clear that Odd Nansen did think a great deal about his wife.  Not only was Nansen writing for Kari, her was writing to her.  He addresses her directly, often signing off with a “Good-night, Kari.”  But even when not addressing her directly, everything he wrote was for an audience of one.  While imprisoned in Norway (Jan. 1942—Oct. 1943) the pages of the diary were periodically smuggled out to her—once Nansen even bribed a German driver to deliver an installment to her!

As Nansen’s daughter Marit has explained, upon receipt Kari would often gather wives of other prisoners and read passages aloud for their benefit as well.  Kari was savvy enough to realize that the pages of the diary were incendiary—their discovery could lead to vengeful punishment for many parties, most especially Nansen himself.  Accordingly, she cleverly hid the pages in the false bottom of a bedroom nightstand.  Shockingly (and providentially) the one time the Gestapo searched the house (after Nansen had had his run-in with the commandant) the agents, in their single-minded search for something hidden, overlooked an underground (and therefore illegal) newspaper lying in full view on top of the nightstand.

Once in Sachsenhausen, all of Nansen’s communications were limited to short, highly censored, letters.  This was just as well.  As Nansen quickly notes, “I’m glad they know nothing of this at home—or of anything that goes on in German concentration camps.”

Nansen didn’t hide his psychological need for Kari: “I can’t do anything without you, not even be in prison.” If the diary was his outreach to her, far more important to him, of course, was what he received from her: letters and (while still in Grini) occasional visits.  There is no question but that those letters and visits sustained him.

A letter was “a living breath of home,” and a visit a “radiant moment,” where Nansen “could have sat for hours and just looked at her, and held her hand. . . and been in heaven.” 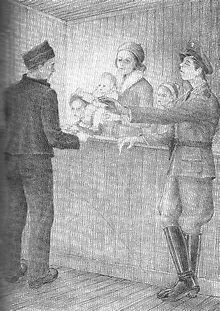 It’s hard to imagine that Nansen could have made it through his long incarceration without the emotional anchor provided by Kari.

For her part, Kari had to manage her fourth pregnancy and delivery alone, and then raise and protect her four children (oldest not yet 15), again alone.  Food and heat were hard to come by. Daughter Marit recounts eating dandelion greens, and raising rabbits for food.  And any encounter with the German occupiers (and there was approximately 1 German for every 10 inhabitants) could lead to trouble.  Instead of shying away from danger, young Marit courted it, assisting prisoners—who often worked unloading rail cars at the nearby station—to smuggle notes to their loved ones.

It all made for a long list of worries.

But Kari, like so many other wives (and occasionally, husbands) of the roughly 40,000+ Norwegian prisoners arrested at some point during the occupation, kept the family intact through the dark days of 1942—1945.

As I mention in my Introduction, I believe it was quite intentional, when Nansen was once asked by an inquisitive official in Sachsenhausen what he was writing so secretively, that Nansen responded: “I’m writing a love story.”  And indeed he was.  The diary, where he poured his heart out to his own Kari, was, in a sense, one long love letter to her.

Odd Nansen and Kari Hirsch were married 93 years ago today.  Writing about their wedding anniversary on August 27, 1944, Nansen observed, “The wealth [our marriage] has given us . . . no one can take from us.  It is of eternity and will never die. . . .”  That’s something worth commemorating.