[You have a unique chance to meet Marit (virtually).  See below for details.]

Marit was actually born here in America—in Brooklyn, NY, to be exact, while her father was working in New York City (1927—1930) in architecture/urban planning.  Although many people refuse to believe this, I maintain that I can still detect a slight Brooklyn accent beneath her Norwegian lilt.  She was only one and a half when the Nansen family returned to Norway in the spring of 1930, a move precipitated by the illness of her famous grandfather, Fridtjof Nansen (who died May 13, 1930).

Marit’s childhood was anything but ordinary.  When she was but eleven and a half, Germany invaded and occupied Norway (April 9, 1940). Now German soldiers were ubiquitous.  Danger lurked everywhere.  Conditions were tough.  Even children were affected: the Nazis tried to control the school curriculum, all organized sports, and even the church liturgy—all of which aroused vehement pushback from the Norwegians.

In early January 1942, Marit, her parents, and her two younger siblings, Eigil (age 10) and Siri (age 8) were enjoying a respite from the cares and concerns brought about by almost two years of occupation.  They were on holiday near Lillehammer, enjoying a rustic mountain getaway in a hytte (cabin) owned by Odd Nansen’s business partner, Ernst Holmboe.

It was a quiet Tuesday evening, and the family was gathered around to hear the nightly BBC Norwegian broadcast when they saw three men with flashlights approaching the hytte.  The radio was hurriedly hidden away (owning a radio was illegal, as was listening to the BBC).  The three strangers (two Germans and the local sheriff) announced only that Nansen was being summoned to Oslo for “questioning.”  Nansen writes in his very first diary entry the following: “Kari [his wife] was calm, Marit, Eigil and Siri cried, poor things, but were smiling bravely through their tears before I left.”

She was old enough to begin to imagine what might happen to her father.  But probably neither she nor her father could imagine how horrifying his next three and a half years would actually be.

While Nansen was imprisoned in Grini, a police detention camp outside Oslo, Marit was occasionally able to visit her father, accompanied by her mother and sometimes her siblings.  One memorable visit occurred on Thursday, August 5, 1943.  This time Marit arrived with Nansen’s partner Holmboe, who was there on a business visit.  Initially Marit was refused access by an overly punctilious interpreter, but tragedy was averted when a sympathetic German guard, on his own initiative, pleaded Marit’s case.  Result: Marit was allowed into her father’s presence.

“Marit came rushing over, crying bitterly; she had been in such despair because they wouldn’t let her see me, poor child.  Oh, how it warmed my heart; I do believe she cares a little for her daddy, and now I am not afraid she may have grown away from me and forgotten me in this time.”

It was a good thing Marit and Nansen saw each other then; within weeks Nansen would run afoul of Grini’s commandant, resulting in the Einzelhaft (solitary confinement) followed by transport to Sachsenhausen.  Nansen would need to rely on that bittersweet memory for the next two years, as Marit matured into a young woman.  And Marit would have to help keep her family going without their father for two more years. 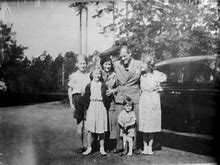 The Nansen Family greeting their father upon his return home from captivity. Marit on the right.

My first encounter with Marit occurred in August 2010.  Following an introduction provided by Tom Buergenthal, I arranged a stopover in Oslo en route home from attending a wedding in Stockholm.  As befitted a first meeting, the interview was rather formal and proper. Marit graciously answered all my questions, as she was to do, again and again, over the next six years, as I edited, annotated and wrote the introduction to Nansen’s diary.

What evolved from that first meeting was an immensely enjoyable and rewarding friendship—including visits to Norway and vice versa (which I have written about here).  As I mention in my Acknowledgements, “To come to know Marit as I have is truly one of the unexpected, but deeply cherished, joys of this undertaking.”

SKÅL, Marit, on your wonderful achievement, and many more birthdays to come! 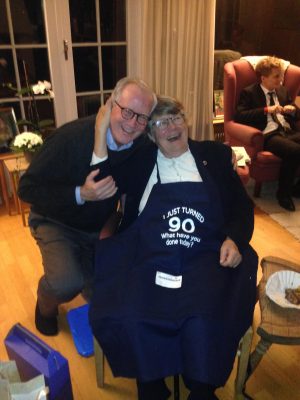 Me and Marit celebrating her 90th birthday in Oslo.

[Note: Dear readers, you have a wonderful chance to meet Marit (virtually).  Here’s how.  On Sunday, November 15, at 9:00 am (ET) I will be the guest speaker at the 14th Annual Kristallnacht Commemoration sponsored by The Jewish Federation of Greater New Haven and Congregation Or Shalom. The highlight of the event will be the presentation (virtually) by Senator Richard Blumenthal of Connecticut to Marit and her family of a U.S. Senate Resolution commending Odd Nansen for his courageous humanitarian work prior to World War II—via Nansenhjelpen—and his inspirational World War II concentration camp diary, From Day to Day.  Register for the free event via the following link: us02web.zoom.us/webinar/register/WN_8X2vn1cTSYqUFrLXFeUYvQ.  I hope you will be able to join me when Marit accepts her father’s well-deserved commendation!]