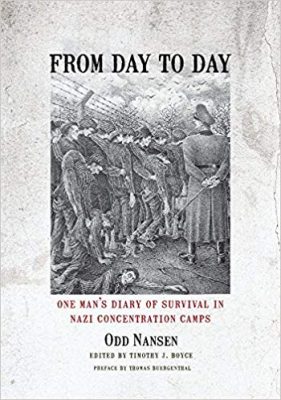 Eighty years ago today,  three officials—two German, one Norwegian—approached a small cabin in snowy East Gausdal, Norway, and informed Odd Nansen that he was wanted for questioning in Oslo.  In fact, he was part of a round-up ordered by the German overseer of Norway, Reichskommissar Josef Terboven.

“I heard about the new actions against special officers and against friends of the royal family, who were all arrested at this time.  I supposed I must come under the latter heading, and if so I should probably be ‘inside’ until the was was over?”

As a hostage, Nansen was indeed ‘inside’ until the war was virtually over–almost 40 months later.  The record of his incarceration became From Day to Day: One Man’s Diary of Survival in Nazi Concentration Camps.  The diary has been hailed as a masterpiece—both upon its initial publication in English in 1949, and its subsequent re-issue by Vanderbilt University Press in 2016.

On the very same day as Nansen’s arrest, the governments-in-exile of nine German occupied nations, including Norway, issued the St. James Declaration, which set as one of their principal war aims the punishment of criminal acts perpetrated against their civilian populations by the Germans.  The U.K. and the U.S. were present at the St. James Conference, but as non-occupied countries, did not sign the Declaration.

Whether all those “guilty of, or responsible for, these crimes, whether they have ordered them, perpetrated them, or participated in them,” were ever fully punished is debatable. Nevertheless,  Nansen’s diary serves as a damning indictment of Nazi policies, and a roadmap for war crimes.

William L. Shirer, bestselling author of Berlin Diary, and future author of  the blockbuster The Rise and Fall of the Third Reich, reviewed Nansen’s diary  in 1949 for the New York Herald Tribune.  He, too, recognized the historical importance of  a diary which showed “how the Germans behaved when they had a large part of civilized Europe at their feet.”  And yet, he noted, “and this is what makes this record unique—Nansen never gave in nor did he lose his faith in mankind.”

Now, that’s something worth remembering on this day in history.

The preceding first appeared, in slightly different form, on January 13, 2018.