“The most important thing is not to reach your goal, but always to be on your way—always on your way.”  Fridtjof Nansen 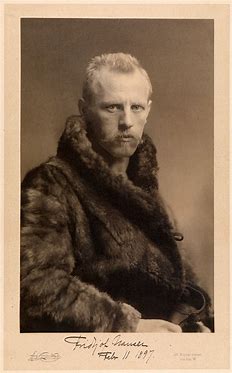 On this day in 1893, on the heels of the summer solstice and the all-important midsummer celebration, Fridtjof Nansen, Odd Nansen’s father, departed Oslo (or Christiania, as it was then called) on board his ship Fram.   His objective: the North Pole.

Nansen (1861—1930) had already earned his spurs by becoming the first man to cross Greenland’s forbidding terrain, in 1888.  But reaching the North Pole would be a significantly more formidable undertaking, something many had tried, and all had failed, usually with disastrous consequences.  Nansen’s approach would also be unique: he purposely planned to embed his ship into the polar ice cap and allow the ice cap’s drift to carry the ship north, without it being crushed.

To do this Nansen had to design a new ship, one “as enduring and as strong as possible; it shall be just big enough to carry supplies of coal and provisions for 12 men for 4 years.”  Many of the best polar experts thought the plan nothing short of madness.  Adolphus Greely, the dean of American polar explorers (and once the holder of the farthest north record), called it “an illogical scheme of self-destruction,” and found it “almost incredible that the plan here advanced by Dr. Nansen should receive encouragement or support.” 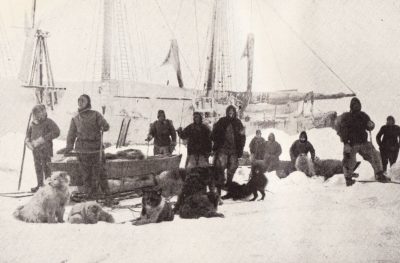 Fram and its crew

But in the end Nansen proved all the naysayers wrong. Although he never reached his ultimate goal—the Pole—he ventured farther north than any man had ever gone, and in the process proved his theory of arctic drift.

Today we complain about quarantining safe at home, with every creature comfort.  Imagine, if you will, spending any length of time—to say nothing of 3+ years—aboard a cramped ship with 11 strangers, where almost 6 months of every year are in total darkness, and where the outside temperatures are often well below zero.  Now, that’s hardship.

As an adventure story alone, Fridtjof Nansen’s feat has few peers.  But, more importantly, it would have a direct bearing on the life of his yet-to-be-born fourth child, Odd Nansen. 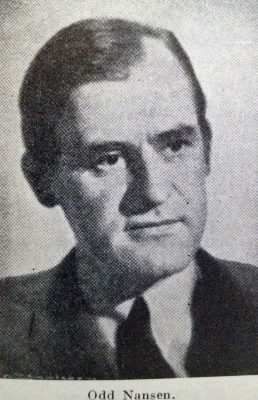 As Fridtjof Nansen’s biographer, Roland Huntford, observes about his trip, “This combination of achievement and publicity [abetted by Nansen’s striking looks and the advent of the telegraph] gave Nansen the fame that lasted a lifetime.”  All of Nansen’s later accomplishments—playing a key role in Norway’s independence; facilitating the introduction of a new royal dynasty; first ambassador to Great Britain; humanitarian work for the League of Nations; Nobel Peace Prize—all grew out of the international reputation Nansen earned from his polar adventure.  As Huntford concludes, “Without the Fram there would be no Nansen as we know him.”

This fame also attached to his son Odd Nansen, making him a prime target when the Nazis went looking for suitable hostages in early 1942.  Thus, it is not too much of a stretch to say that, without the Fram, there might never have been Odd Nansen, Häftling (Prisoner) Number 1380.

There was another equally important inheritance running from father to son.  As Fridtjof’s granddaughter, and Odd’s daughter, Marit (Nansen) Greve, has written about Fridtjof’s polar trip: “Here was courage, strength and endurance in abundance—a man who could undoubtedly meet the challenges and conquer the strongest forces around him.”

Odd Nansen did not have to conquer long nights, the cold, isolation, and polar bears.  The forces arrayed against him during his captivity were nonetheless no less daunting: spiritual darkness; fear; doubt; hate.  But reading Odd Nansen’s diary, From Day to Day, it is easy to conclude that, like his father, Odd Nansen had “courage, strength and endurance in abundance . . . [to] meet the challenges and conquer the strongest forces around him.”