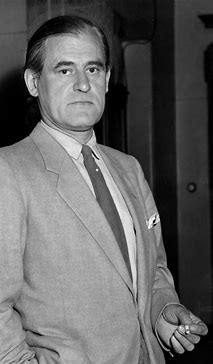 I have now spent years studying Odd Nansen, years writing blogs about various aspects of his life and diary, years giving presentations about him, his family, his work with refugees, etc.  I have a new article due out next month about Nansen and his connections to the Norwegian art world of his time.

Some might well conclude from all this effort that I suffer from a case of hero worship.

However, I spent enough time in the company of my late dear friend Marit (Nansen’s eldest child) to have learned from her that Nansen wasn’t perfect, just human like the rest of us.  There were rough patches in his marriage to his wife Kari, there were times when his commitments kept him away from his children.  There were even times in prison when he clashed with his fellow inmates.

For example, on December 21, 1943, Nansen records in his diary: “The Christmas committee fell by the ears yesterday.  It’s B. who is on the warpath against Frode [Rinnan] and me; we bite back, and the whole thing is like a nursery.  B. staked his position on my not making the Christmas speech, Frode left, and I proposed to the committee to get rid of B.  I lost and also left.  B. irritates me to the marrow, that I won’t deny, but I’m a little dismayed at its going so far.  Well, well, Merry Christmas.”  [NB: I have not been able to identify who B. was.]

Which brings me to this year’s quotation.  W.E.B. Du Bois once said the following of Abraham Lincoln, which is equally true of my regard for Nansen: