In the history of the Holocaust, there are many somber anniversaries.  I’ve written about a few, including the start of the liquidation of the Warsaw Ghetto (here).

On October 6, 1944, seventy-three years ago today, the talented songwriter and playwright Ilse Weber went to her death at Auschwitz, voluntarily accompanying the children she had cared for while in Theresienstadt (which I’ve written more about here). 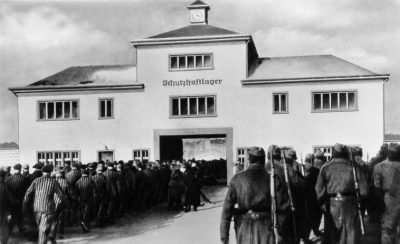 Exactly one year earlier, on October 6, 1943, Odd Nansen arrived at the German concentration camp of Sachsenhausen, located approximately twenty-five miles north of Berlin.  After a practical joke went awry, and became a contest of wills between Nansen and the head of the head of the protective custody camp in Grini, Norway, Nansen was informed:

“that I would now go to Germany and find out what a real German “K.Z.Lager” (Kazettenlager) [Concentration Camp] was like.  He assured me that I need entertain no hopes of ever getting back to Norway—they could just put up the “monument” upon my grave (once more) straight away, for from the place I was now bound for, people seldom returned alive.”

As Nansen departed Grini for his new destination, he remained upbeat, observing “There’s something strange about movement—even if one is going to hell.  At any rate one’s getting somewhere—something is happening, the route may be pretty, and isn’t the paving celebrated?”  And, commenting on his arrival in Sachsenhausen after a voyage by bus, ship and train, Nansen observes:

“In the light from a crack in the door [of the railcar] where I was lying, I wrote about the strange journey.  Unfortunately I didn’t manage to preserve that section of the diary, but I am certain there was nothing dolorous in those travel notes.  We were going on—slowly perhaps, but we were getting somewhere.  Something was happening—we were in motion.  And as I said, there’s something about movement—even if it leads to hell.  And that was pretty much where it led.”