Eighty years ago today German Armed Forces showed up in Norway—uninvited, unannounced, and unwelcome.  Despite holding out for longer than most other European countries overrun by the Nazis, Norway finally capitulated on June 10, 1940.  It would remain occupied for over five years—longer than any other European country, excepting only Czechoslovakia and Poland. 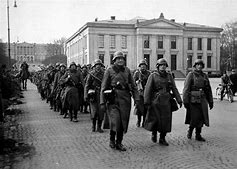 Germans employed almost 400,000 troops during their occupation of Norway, or approximately 1 soldier for every 7.5 civilians.  On a per capita basis, that would be the equivalent of America being occupied today by a foreign army totaling over 44 million soldiers—more than the combined populations of Illinois, Pennsylvania, North Carolina and New Jersey.

Notwithstanding this overwhelmingly heavy German presence, many people, of all ages, joined the Resistance—including 38-year-old Odd Nansen—activities that he would later describe in his diary as “wanton playing with fire” [July 14, 1942].  No less an authority than preeminent British military historian John Keegan once observed that the Norwegians “provided the SOE with its most dependable and spirited supporters in Western Europe.” The SOE, or Special Operations Executive, was a British World War II organization formed to conduct espionage, sabotage and reconnaissance in occupied Europe.  [I’ve previously written about resistance heroes here, here, and here.] 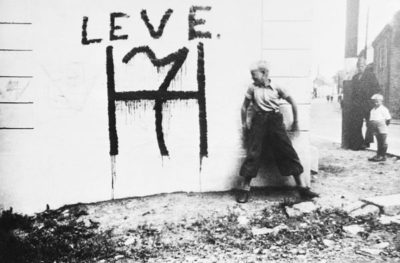 H7: The symbol for King Håkon VII, and widely used as a symbol of defiance to Nazi rule.

Many people are familiar with the unusual events in Norway preceding the invasion.  How, just days prior to their invasion, the German Embassy in Oslo invited many prominent Norwegian officials, and others, including America’s Ambassador to Norway, Florence Harriman, to a lavish reception and film screening of a “peace film.”  Rather than a pleasant nighttime social event, the guests were shown a shocking film of Germany’s recent blitzkrieg attack on Poland, together with a warning that this is what would happen to a country if it resisted the Nazis.  As a bit of psychological warfare it may have missed its mark.  As Harriman wrote in her diary: “The audience was shocked and—this seems strange now—still puzzled, as to why the film had been shown to them, to Norwegians.”

Clare Boothe Luce (whom I’ve written about here) also relates, in her highly readable memoir, Europe in the Spring, about another equally bizarre event which, in retrospect, explains much about the mindset of Europe at the dawn of World War II, and what can occur without collective security agreements between nations facing a common enemy.  Luce (an American ambassador to Italy and Brazil after the war, and the wife of publisher Henry Luce) found herself in Holland on May 7, just three days before it would be overrun by German forces.  That night she dined with Herr Snouck Hurgronje, Holland’s Permanent Secretary General for Foreign Affairs.  Naturally, Luce writes, she asked him about the impending crisis.  Here is their exchange:

‘Ja,’ he answered cheerfully.  ‘The same sources have informed our government so which informed it five days before the German invasion of Norway.’

I said, aghast: ‘You knew five days before that the Germans were going to invade Norway?’

‘Ja!’ he affirmed proudly. ‘Our sources of information are excellent.  You see, a good Dutchman often can pass as a real German.’ (I thought: ‘And vice versa.’)

I asked: ‘You knew five days before? Did you—tell the English and the French about it?’

‘Certainly not,’ he said indignantly.  ‘Why should we? They are not our allies.’”

Holland was technically neutral before the war.  Parts of the country were liberated by Allied forces in the second half of 1944; the remainder of the country was finally liberated on May 5, 1945.  As Luce mordantly records later in her book: “(Mr. Snouck ten days later was in London, a member of her exiled Majesty’s belligerent government.)”