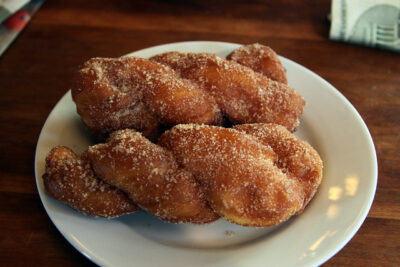 Yesterday, as is my custom, I took my dogs Trina and Joni out for their morning constitutional as soon as I got up. (Actually, it’s the dogs’ custom—they’ve trained me, not the other way around.)   The air was crisp, the sky a deep blue, the sun just peeking over the horizon, a frost lay on the grass.  In a word, glorious.

That morning reminded me of another morning long ago when I was a paperboy.  I had inherited my paper route from my older brother Tom, who had outgrown it. [Translation: My parents told me I was now the new paperboy, and my indentured servitude would last until they decided otherwise.]  When one has no say in the matter, it’s best to simply submit and try and make the best of a bad situation.  And there were plenty of downsides: the less time I would have playing with my friends; the pouring rains; the freezing snows; the miscreant dogs. And fickle customers too: one afternoon, at the usual time, I saw one of my customers waiting by their mailbox about 100 yards ahead.  I quickened my pace, then broke into a trot, and finally a dash, all the while with a 35-pound bag banging against my right hip.  Out of breath, I hand-delivered the paper, expecting, perhaps, a word of thanks or encouragement.  What I got was: “Well, better late than never.”

Having a fairly large route—about 85 households—the size of the paper also affected my well-being.  Wednesdays were the worst.  All the merchants placed their advertisements in the Wednesday paper, swelling its size (those were the days).  Even with bags on both hips, I would still need to return home for a new load—meaning even less time for play.  Sunday morning was in a league of its own, but my parents stoically agreed to load the entire backseat of the car with the papers, allowing me to simply reach through the rear window as they drove and I walked alongside.

Conversely, Saturdays were the best day.  Now, I am congenitally against getting up early, and it seemed a crime against nature to miss sleeping-in on the only non-school, non-church day of the week, but once I was out and about, I was fine.  The paper was so thin I could easily carry my entire route in a single bag.  And at 7:30 am the neighborhood was all mine: no kids playing in the street, no adults making a racket with lawn mowers; no pesky dogs about.  I could daydream, and look forward to that second bowl of Cheerios waiting for me at home when the job was done.

One crisp late fall/early winter Saturday morning, my reverie was interrupted when Mrs. Kozolewski, one of my customers, pulled up alongside me in her old-model, two-tone Chevy. [I can no longer be sure her name was precisely Kozolewski, but I know it was 100% Polish.  My neighborhood consisted almost exclusively of Italian, Irish, and Polish surnames, with an occasional “Smith” or “Jones,” and one Jewish family, thrown in for good measure.] Mrs. K. rolled down the window, flashed me a friendly smile, and asked, “Would you like a donut?  I just came from the bakery.”

Well, what could I say?  Here was an offering featuring two of my favorite food groups: dough and sugar.  (Readers may remember my ode to the oatmeal raisin cookie, here).

I nodded, and she reached into her bag and handed me a cinnamon cruller.  A warm cinnamon cruller.  I had never had a cruller before, being something of a jelly donut devotee at the time.  One bite and I was transported, to a new and higher plane of existence. I don’t think I’ve ever had a better donut before, or since—and I’ve had my share.

I guess it all goes to show that even the smallest act of kindness can reverberate down through the years, long after the event itself.  Mrs. Kozolewski, wherever you are, thank you again, and Happy New Year.

PS: For a more contemporary story of a kind gesture, and what it can do, read this story.