Civilian Lives in War: The Role of Luck

Civilian casualties in war have existed for as long as war itself—it is happening today in Syria and elsewhere as we speak. World War II, the most violent cataclysm ever, took civilian deaths to new heights.

For example, 77 years ago today, Great Britain experienced what would prove to be the worst single loss of civilian life in the war.  At 8:17 pm on March 3, 1943, air-raid sirens sounded in London.  By now Londoners were well acquainted with such air raids, and dutifully headed to their closest underground station, which also functioned as an air-raid shelter.  At Bethnal Green, one such station, a large crowd was heading down the unlit stairs when a woman with a small child tripped and fell near the bottom.  Others behind her fell over, and soon nearly 300 people were trapped in a tangled mass of squirming bodies.  Before it was over, 173 people (including the young child) were dead, crushed or asphyxiated; another 60 needed hospital attention.

Meanwhile, 600 miles away, Odd Nansen was writing about another event that occurred closer to home on March 3 that had implications for Norway’s civilians.  [Nansen did not—and could not—write about the Bethnal Green disaster, as British authorities suppressed the news, fearing it would incentivize the Germans to continue air attacks and cause similar panics.]

Here’s what Nansen wrote in his diary, three days later, on March 6:

“The news is excellent—but still with no essential points. . . .  The Knaben molybdenum mines bombed to pieces the other day.  Yes, there are a few things going on—that one must admit.”

In my diary annotations I explain that the Knaben mines were of vital strategic importance to the war.  Knaben was the only molybdenum mine still operating in Europe and molybdenum is a critical alloy used in hardening steel.  It was only natural that the Allies would seek to deny Germany use of the site.

At the 2019 Norsk Høstfest, a gentleman approached my table, and introduced himself as Knut Gjovik.  Turns out that Knut’s father, Leiv Gjovik, was the foreman of the Knaben mine.  In fact, working at the mine was something of a family affair: Leiv’s brother, also named Knut Gjovik, was an interpreter for Russian POWs working there, and young Knut’s maternal uncle, Lars Knaben, was the mine’s assayer. 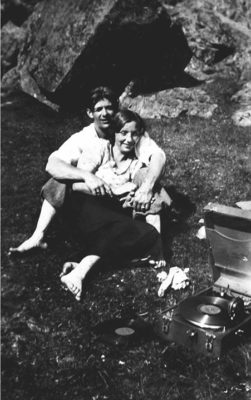 Young Leiv Gjovik and his wife Anna before the war.

Given the mine’s strategic importance, it didn’t take much imagination to figure that it was on the Allies’ hit list.  But how would the Allies strike?  Sabotage?  Aerial bombing?  And when?

Ultimately, the British Special Operations Executive (S.O.E.) ruled out sabotage; bombing it would have to be.  On March 3, 1943, ten British de Havilland Mosquito bombers, manned by Norwegian crews, attacked.  The British after-action report concluded the raid was a success: the mines “were completely put out of action,” the damages estimated to be between “two and three million kroner.”   The New York Times cited officials who considered Knaben “of greater economic and industrial importance . . . than any other target in Norway.” 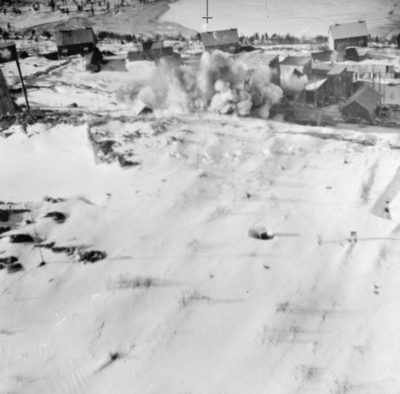 The bombing of Knaben

The after-action summary included an additional fact: “It is reported that the German mine manager and 17 Norwegians were killed.”  Where was Leiv Gjovik? On the morning of the attack, Leiv, who apparently hadn’t missed a day of work in over two years, didn’t feel right and so called in sick.  He was thus was spared, while his entire crew was wiped out.  Did he know something?  Was he in fact in the Resistance?  Was it divine intervention, as Anna believed?  Or was he just plain lucky?  To this day even his son is not totally sure.  Leiv was subsequently interrogated at length by the Germans, but nothing ever came of it.

One thing is certain: had Leiv Gjovik reported for work as usual, he, too, would likely have been added to the swelling ranks of World War II’s civilian dead, and I never would have been able to calmly discuss Odd Nansen, or the Knaben raid, with his son.  Such are the vagaries of war. 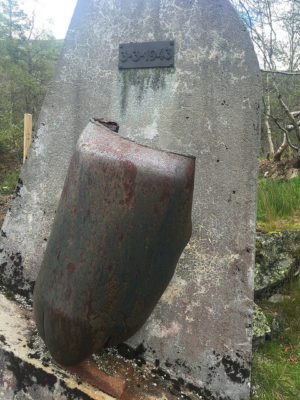 Following the war, a monument was erected to the victims of the Knaben raid.

*March 3 continued to be an ill-omened date for civilians.  Two years later, on March 3, 1945, fifty British bombers attacked a V-2 launch site located near The Hague in Holland.  They missed the target and instead dropped their loads in a residential area more than a mile away.  The result: over 500 Dutch civilians dead and 20,000 homeless—including the Dutch resistance fighter who had provided the tip.

**Photos of Leiv Gjovik and of the Knaben Memorial generously supplied by Knut Gjovik.