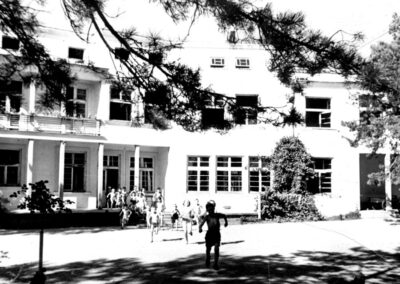 Seventy-six years ago today, Tom Buergenthal arrived at a Jewish orphanage in Otwock, Poland.  [Located 14 miles southeast of Warsaw, Otwock had been the site of a Jewish Ghetto earlier in the war.  By September 1942 the Ghetto’s inhabitants, numbering 12-15,000, had all been murdered.].  Tom had just spent the better part of 6+ months, since his liberation, traveling with the Scout Company of the 1st Kosciuszko Division, a Polish army division formed under Soviet auspices which had fought for months and participated in the fall of Berlin.

With his own cart and pony, and specially tailored military uniform, Tom was the division’s de facto mascot.  But with the war’s end, and the division back in Poland waiting to be demobilized, it was obvious that Tommy had no place, long-term, in such an organization, no matter how much they doted on him.  A sympathetic soldier, aware that Tom was Jewish (a fact which Tommy, understandably, was loath to publicize) located the orphanage in Otwock and made all the arrangements for Tom’s transfer to their care.

He had last seen his parents over a year ago; he had no idea of their whereabouts, or if they were even still alive.

He could neither read nor write.

Can anyone of us imagine—even for a moment—what it could have been like to be in his shoes at that point?

As Tom writes in his memoir A Lucky Child:

“It was here that I underwent a gradual transformation from being a perennially frightened and hungry camp inmate struggling to survive to an eleven-year-old child with a relatively normal life.  I enjoyed almost every minute of my stay at the orphanage.”

I asked Tom a simple question: did the orphanage still exist?  This question prompted Peggy to do a Google search.

What she found was nothing less than amazing.

An archival film, apparently shot in the summer of 1946, and now in the possession of Yad Vashem, the World Holocaust Remembrance Center, showing life at Otwock.  Narrated in Yiddish and Hebrew, it shows clips of young children singing, being entertained by dancers, etc. And there was young Tom, now age 12, staring intently at the camera.

In retrospect this is not altogether too surprising.  As Tom also relates in his memoir:

“Since I was the only one in the orphanage who had survived Auschwitz, I was frequently interviewed by journalists and trotted out to meet important visitors.  I even appeared occasionally in the newsreels that were shown in Polish movie houses in those pretelevision days.”

We see shots of young Tommy, shirtless, looking healthy.  But one can’t help but notice that Tom is not really smiling, merely looking intently and seriously at the camera.  After all, it was not until September 1946—probably soon after this film was shot—that Tom finally learned for the first time that his mother was still alive (in fact he was mistakenly informed at the time that his “parents” were alive).  By the time this film was shot Tom had just about given up hope that he would ever be found and reunited with his parents, and had thus agreed to emigrate to Palestine.

Ironically, it was this decision—born of despair—that led to his name appearing on a list at the Jewish Agency of those wishing to emigrate.  In turn, this fact somehow—miraculously—caught the eye of someone at the Agency who had another list—a list of missing persons—with Tom’s name on it as well.  And that was how Tommy was finally found, and reunited with his mother.

Before I left Tom and Peggy for the day, we played the film over and over several times.  In some of the images Tom could spot faces he remembered.  Even the words of the some of the songs came back to him.

Needless to say, it made for a very special, and very emotional, afternoon. 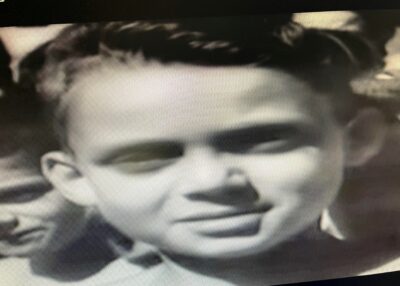