[* If you haven’t yet seen Atlantic Crossing, please stop reading this, and watch it.  Do not pass Go, and do not collect $200.]

June 7 is an important date in Norway’s World War II history.  On June 7, 1940, King Haakon VII, Crown Prince Olav, and many Norwegian government officials, fled to Great Britain aboard the British destroyer HMS Devonshire.  On June 7, 1945, after exactly five years in exile, King Haakon returned to a free Norway, and to a rapturous welcome from the Norwegian people.

Both of these events—the King’s flight and his subsequent return—are recounted in the new, eight-part PBS Masterpiece series Atlantic Crossing.  I recently finished watching it with great interest.  Even if its central focus, the relationship between President Franklin Roosevelt and Crown Princess Märtha, is largely fictional (but “inspired by true events”), there is still a great deal of interesting overlap between matters I’ve previously written about here and the events depicted in the show.  I thought it might be fun to recount some of those connections.

I’ve already written (here) about the close connection between King Haakon VII and Fridtjof Nansen; how Nansen was instrumental in convincing Haakon, then a 33-year-old Danish prince, to become the king of the newly independent Norway in 1905, and how the two remained close personal friends until Fridtjof’s death in 1930.

Not only were Haakon and Fridtjof close, Crown Prince Olav was also good friends with Odd Nansen.  Nansen’s older sister Liv wrote a family biography where relates: “In the springtime they [the King and Queen] brought the Crown Prince, little Olav, out to Pølhogda so that our three small ones and he could play.”  Odd Nansen and Olav also attended the same school in Oslo together (although Odd was one grade ahead).  Olav was equally close to Odd Nansen’s wife Kari, and, following Nansen’s death in 1973, King Olav continued to visit her and play bridge with her and her friends.

Episode 2 depicts the German efforts to kill Haakon and Olav, once driving them and the cabinet ministers into the snowy woods during a bombing raid.  Although not stated in the show, this bombing raid followed on the heels of the government’s decision to fight on, rather than surrender to Germany’s demands.  Thereafter, Haakon and Olav were under constant German attack.  A similar bombing raid in Molde, Norway, in late April 1940 gave rise to a fish(y) tale, as I’ve previously related (here). 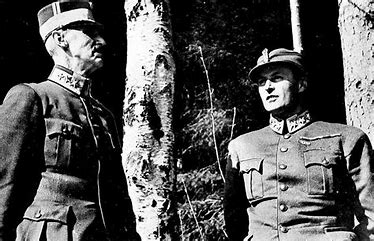 Florence (“Daisy”) Harriman (referred to as “Madame Ambassador” in the series) was America’s Minister to Norway in 1940.  She was only the second woman in U.S. history to be appointed to such a post.  Norway was an appropriate choice for such a pioneering appointment: it was the fourth country in the world to grant female suffrage (years before the U.S.).  According to her memoir, Mission to the North, it was Harriman who, at FDR’s request, personally conveyed upon her arrival in Oslo an invitation to Märtha and Olav to visit the U.S. in 1939, the event with which Atlantic Crossing begins.

Mission to the North describes the incredible chaos following the surprise German invasion of April 9, 1940, as well as the scramble by the American legation and the Norwegian government to stay one step ahead of the German invaders.

Harriman’s driver, Capt. Robert M. Losey (seen briefly in the opening scene of Episode 2), was killed in a German bombing raid in Dombås, Norway on April 21, 1940, becoming the first U.S. serviceman killed in World War II (see here). For her efforts in arranging the safe passage of Crown Princess Märtha and her children to the U.S. aboard the USAT American Legion, which sailed from Petsamo, Finland on August 16, 1940, she was awarded the Grand Cross of the Order of St. Olav by King Haakon in 1942. 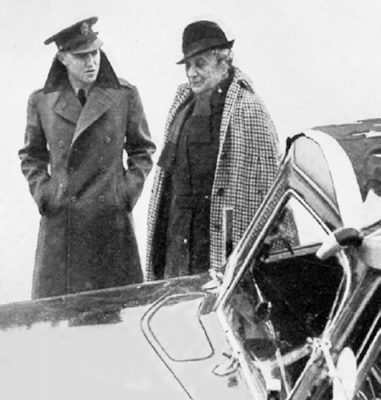 Harriman’s counterpart, Wilhelm Morgenstierne, was Norway’s minister and later ambassador to the U.S. from 1934 to 1958.  He was also a close friend of Fridtjof Nansen, having served as an assistant to Nansen during World War I, when Nansen headed a Norwegian mission to the U.S. to secure relief from the Allied naval blockade.  According to Nansen’s sister Liv, Morgenstierne was even skiing with Fridtjof Nansen in early 1930 when Nansen began to feel unwell; Nansen died a few months later, having never fully recovered. 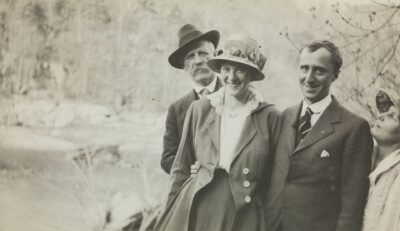 As shown in the series, Morgenstierne had little success getting access to Roosevelt to plead Norway’s case.  Odd Nansen had much the same experience when he traveled to DC in the fall of 1939 to plead for more aid to Finland, which was then at war with the Soviet Union.  Here’s what Nansen wrote in his diary on January 21, 1940, about his efforts: “Sought an audience with Roosevelt today, but have not yet heard anything.  Everything is so damn slow and difficult.  I wonder if I should just go over to the White House and ring the bell.”

First Lady Eleanor Roosevelt also had connections with the Nansens.  From 1935 to 1962, Eleanor wrote a six-day-a-week syndicated column called “My Day” which reached a readership of over 4 million in 90 newspapers at its height.  In her August 12, 1939, My Day column, Eleanor wrote:

“I remember meeting Mr. [Fridtjof] Nansen on various occasions.  You felt that he was suited to an outdoor life of adventure. . . .   Yet he spent years of his life at a desk interminably talking in diplomatic terms to people who diplomatically desired to do little or nothing.  It was a big sacrifice to ask of any man, and yet thousands of people who do not even know his name, have blessed the work he did on their behalf.”

In a December 1961 column, Eleanor revisited the topic of Fridtjof Nansen on the centennial anniversary of his birth, where she was even more effusive: “Nansen’s work has been discussed and commemorated all over this country.  The character of this man, I think, is one that every child in our schools should study and know.”

Also, in 1954, Eleanor Roosevelt became the inaugural recipient of the Nansen Refugee Award from the United Nations, in recognition of “outstanding service to the cause of refugees, displaced or stateless people.” (In 1961, the same Nansen Refugee Award was bestowed upon King Olav V of Norway.) 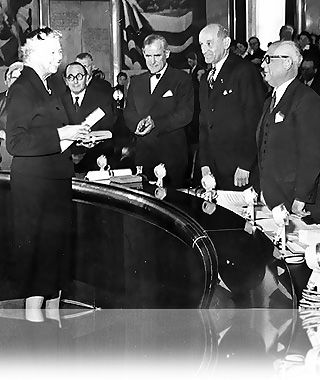 General Carl Gustav Fleischer was the hero of the Battle of Narvik, the first major Allied victory of World War II.  When Norway capitulated to the Germans, Fleischer was ordered to follow King Haakon and the cabinet into exile in Great Britain.  He left Norway June 8, 1940 aboard patrol vessel Fridtjof Nansen.  What’s Fleischer’s connection with the Nansens?  I haven’t found any—yet.  But I do know that Fleischer’s chief of staff during the Battle of Narvik was Odd Lindbäck-Larsen.  Lindbäck-Larsen did not go into exile with his general—he was imprisoned in Polizeihaftlager Grini and Kazettenlager Sachsenhausen along with Odd Nansen until the end of the war, and is mentioned several times in Nansen’s diary.

As noted, the final scene of Episode 8 shows Haakon, Märtha and her children all being cheered on by a crowd of delirious Norwegians in Oslo harbor.  Today, a statue of Roosevelt sits at that same harbor, a testament to Norway’s gratitude and high regard for his services on behalf of Norway during the war.  The scene in Episode 7, where the newly commissioned HRoMS Haakon VII is delivered to Norway, was the subject of my blog (here). And, as I wrote just last month, Haakon’s bodyguard upon his June 1945 return (as well as Olav’s earlier return on May 13, 1945) was none other than Gunnar Sonsteby. 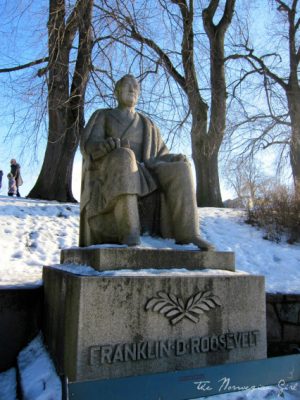 Statue of FDR in Oslo Harbor

In the series Harry Hopkins is shown so often in FDR’s White House that it seems like he must live there.  Well, in fact he did – for over three and a half years.  For a time Hopkins was Roosevelt’s closest aide and confidant, fulfilling many important roles during World War II.

Now, most of my readers know that I am something of a book collector.  Years ago I purchased a book inscribed to Harry Hopkins by its author, James Norman Hall (of the literary partnership Nordhoff and Hall, authors of the Mutiny on the Bounty trilogy—still one of my all-time favorites).  Not only is the book inscribed to Hopkins, Hopkins himself signed it while in the White House in February 1942—when much of the action of Atlantic Crossing was taking place. 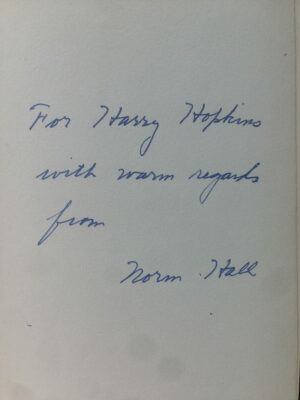 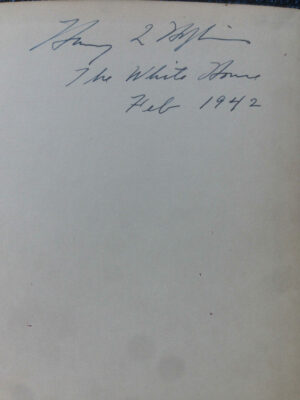 Hopefully, this miscellany has provided some additional color on the many characters depicted in Atlantic Crossing, and will make your next viewing (undoubtedly soon) all that much more meaningful.  Enjoy!

I don’t generally recycle old blogs I’ve previously written, but in some cases I will make an exception.  Two years ago on Memorial Day I wrote about Capt. Robert M. Losey, the first U.S. serviceman to be killed in World War II—it happened in Norway.  The full story can be found here.