“None the less we bid it welcome, and once more fix our hopes, our burning wishes, and our ache of longing on the new year.  The news is excellent, and all things considered there seems every reason to take a rather more cheerful view of things after all.” (From Day to Day, January 2, 1944)

Here’s a few thoughts on various year-end matters that I thought worth mentioning, as we fix our burning wishes on the new year.

Recently I was able to send to each of the U.S. Holocaust Memorial Museum and HL Senteret, the Norwegian Center for the Study of the Holocaust and Religious Minorities their 50% share in the royalties and speaking fees I earned this past year related to Odd Nansen’s diary.  To date my cumulative distributions now top $26,000.

Before the Christmas holiday I was able to see the movie Devotion (which I had previously written about here). Frankly, I was somewhat ambivalent about seeing the movie version of Tom Hudner and Jesse Brown—could it really stand up to the book version (most movies don’t in my opinion).  The film begins by noting that it is “inspired” by the story of Jess and Tom, and there are some film scenes that clearly do not follow the actual events, but overall the film had the same powerful impact that the book version did.  If you get a chance to see this drama, go, but bring tissues.

Recently my wife and I were invited to dinner at a friends’ house, to meet a new couple who had recently moved into town—Bonnie and Jeff.  Jeff, being the excellent attorney that he is, had already Googled our names to get some background on us.  Once we were all settled with a glass of wine, Jeff confessed to being curious why I was so involved with matters relating to World War II, the Holocaust, diaries, etc.  I explained how it all started with a memoir I had read back in 2010, about a young Jewish concentration camp prisoner whose life was ultimately saved by Odd Nansen, and how this prisoner later emigrated to the U.S. and became a world-famous expert on human rights, serving as a justice on the International Court of Justice at The Hague.  By this time Bonnie’s attention was rivetted to my story.  Q: What was this man’s name? A: Thomas Buergenthal.  Q: Does Tom have three sons? A: Why, yes, he does.

Well, it turns out that Bonnie and her younger sister Shannon were classmates with Tom’s  youngest two sons, all while they were attending the Country Day School in—of all places—Costa Rica in the late 1970s.  To add to the coincidence, Shannon is married to a lawyer who attended G.W. Law School—and who of course had Tom as a professor!

In all my travels and presentations, I have now met people who 1) were born in the same village in Czechoslovakia as was Tom, 2) attended the same high school in Patterson, NJ with Tom, 3) went to the same undergraduate college (Bethany College in West Virginia) as Tom, although not in his class, 4) who attended NYU Law School with Tom, and now this.

It is a very small world indeed!

This week I received an email from an old friend, Diana, a brilliant attorney who was recently seconded to her firm’s Singapore office for a short tour of duty.  Diana explained that she was awaiting a meeting at Singapore’s Ministry of Manpower for her work permits.  Just outside of the Ministry of Manpower sits another office, of the Norwegian company NHST Worldwide, a global media company.  Diana just had to share with me the writing she saw above NHST’s office entrance: 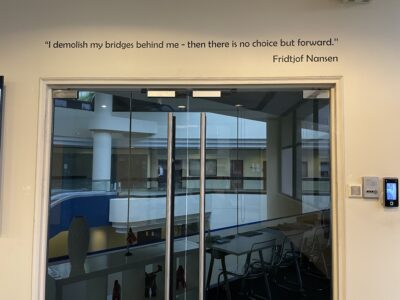 So while Fridtjof may have never made it to Singapore, Singapore knows Nansen!  If you readers ever spot Nansen memorabilia in your travels (including but not limited to the North Pole) please send them along to me and I’ll be happy to share.

And so, on the advice of no less a role model than Fridtjof Nansen, let us all go FORWARD into the New Year with confidence and hope.

HAPPY NEW YEAR TO ALL!