The Lost Diaries of War

My readers already know that I have a thing about diaries. I’ve written about Anne Frank’s diary (here), and a recently discovered Holocaust diary (here).

Some of you may have seen in the April 15 issue of the New York Times a fascinating piece about World War II diaries—more than 2,000—kept by Dutch civilians.  Apparently, they were collected by the government after the war, but, apart from cataloguing, they were never shared with the wider public.  Now, 75 years after the war’s end, they are finally seeing the light of day.

Now the Dutch are for the first time transcribing and digitizing these artifacts, and the Times article contains snippets of the diaries, along with representative images of the actual pages.  The reading is compelling.   Here’s the link.

Coincidentally, I was recently reading a classic by a favorite author of mine, William L. Shirer, called End of the Berlin Diary.  I’ve written about Shirer before (here).  The book covers Shirer’s return to Berlin in 1945, five years after he was expelled by the Nazis for writing unfavorably about the regime.  The book is a mixture of diary impressions and materials Shirer unearthed about the German war machine.  In this sense he is anticipating the work he would undertake in the 1950s when he compiled his magnum opus, The Rise and Fall of the Third Reich.

Some of Shirer’s research and observations are startlingly relevant to some of the diary entries in the Times piece, so I decided to juxtapose certain diary entries with quotes from Shirer’s reporting, which provides a useful counterpoint.

“I’d always assumed they [the Germans] would leave us alone.  We had been neutral until the end,* and good to the Germans.”  Elisabeth Jacoba van Lohuizen-van Wielink [May 10, 1940].

“Breach of the neutrality of Belgium and Holland is meaningless.  No one will question that when we have won.”  Secret speech by Adolf Hitler to top military commanders, November 23, 1939.

“Have no pity.  Brutal attitude.  Eighty million people shall get what is their right.  Their existence has to be secured.  The strongest has the right.  Greatest severity.”**  Adolf Hitler speech, August 22, 1939, to military commanders set to lead assault on Poland.

“This is no life, but hell on earth.  My hands are trembling so much I can barely write.  This is all getting too much.  This is more than anyone can bear.”  Mirjam Bolle [February 23, 1943] [Later sent to Bergen-Belsen]

“[Reading about how few Jews are still alive in Germany] reminds me of another news item in the local press.  It tells of the testimony of a fifteen-year-old German lad, the son of the former SS commander of the Mauthausen concentration camp.  Questioned about his father, the boy said: ‘For my birthday, my father put forty inmates at my disposal to teach me how to shoot.  I took shots at them until they were all lying around dead. Otherwise I have nothing else to report about my father,’”

Finally, a comparison between Odd Nansen’s diary and one of the Dutch diaries, each entry written within months of the other:

“Sometimes I fear that I won’t be believed, because later generations simply won’t wish to accept what’s described in these pages, yet I swear on everything I hold dear to me that none of the events are untrue.”  Anton Frans Koenraads [May 6, 1945].

As the Times article provides wonderful images of various original diary covers and  pages, I thought I’d end this blog with a page from Nansen’s diary that is particularly close to my heart.  On one of my visits to Norway, my dear friend (and Nansen’s daughter) Marit Greve took me to Norway’s national library, where the originals of Nansen’s diary are kept.  I was hoping to capture an image of a representative page.  When I snapped the picture I had no idea of its contents. It was not until I developed the photo later that I realized, to my surprise, that the page in question dealt with Tom Buergenthal. 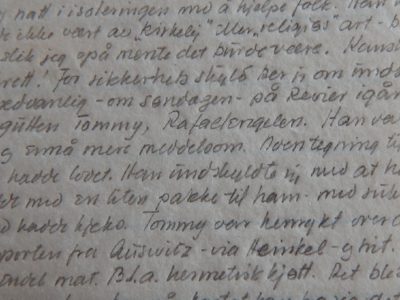 If you look closely in the middle of the image, you will see “Tommy, Rafaelengelen” in Nansen’s handwriting.  The entry is for February 26, 1945, and reads in part: “Yesterday, as usual on Sunday, I was in the Revier.  First I went to see my youngest friend Tommy, the Raphael angel. He was smiling. . . .”

Of all the pages in the diary I might have photographed, I can’t think of one I could possibly have preferred more.

*Recall the words of Netherlands’s Herr Snouck Hurgronje in my previous post, regarding the country’s strict neutrality vis a vis England and France.

** Once Norway’s King Håkon VII refused to capitulate in 1940, the German’s tried to kill him through aerial bombing.