The Many Agonies of Otto Frank

Millions of people worldwide have read the diary of Anne Frank.  By now it has been translated into 70 languages, and regularly appears on many schools’ reading lists.  Millions more, without having ever read the book, know many of the basic facts of her life story.  How Anne received a diary on her 13th birthday, June 12, 1942, while living in Amsterdam, where her family had fled from Frankfurt, Germany to escape Hitler’s persecutions.  How Germany had earlier [May, 1940] overrun the Netherlands, effectively trapping refugee families like the Franks. How the Franks, fearing the worst, prepared a secret living space above the business owned by Anne’s father.  How the Frank family moved into the Secret Annex on July 6, 1942 in response to a summons delivered to Anne’s older sister to report to a labor camp.  How Anne recorded all of her secret thoughts and feelings in her diary for over two years, until August 4, 1944, when the family was betrayed (by whom remains a mystery).  How Anne eventually perished in the Bergen-Belsen concentration camp in northern Germany in February or March 1945.  How her diary became an international bestseller.

But many of those millions would be hard pressed to remember the names of Anne’s sister (Margot), her mother (Edith) or father (Otto), let alone recall their fates.  And yet they, along with the van Pels family—Hermann, Auguste, and son Peter (given the pseudonym van Daan in the diary) and Fritz Pfeffer (given the name Albert Düssel by Anne) all lived together in the close quarters of the Secret Annex, and have their own stories. 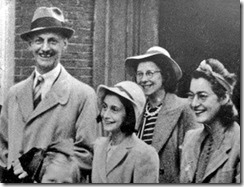 The agony of all eight occupants of the Secret Annex began with their arrest in August 4.  [I have previously written how, once everyone was arrested, but before the Nazis could seize all the contents of the Annex, employee and family friend Miep Gies swept up Anne’s diary and the papers she found strewn on the floor for safekeeping until Anne returned.]  Within days all eight were moved to Westerbork, a nearby transit camp.  Similarly, all eight were put on the same transport to Auschwitz (it was in fact the last transport ever sent from Westerbork to Auschwitz), a three-day journey in sealed boxcars that arrived September 6, 1944.  Although all survived the selection at the ramp, the entire experience, coming so soon on the heels of their sudden arrest, must have been terrifying.  There Otto was separated from Anne and the rest of his family.

When Anne later discovered that those considered unfit for hard labor were sent directly to the gas chambers, she concluded that her father, whom she considered to be in less than the best of health, must have been killed.  Ironically, as we shall see, Otto was the only person of the eight occupants of the Secret Annex to ultimately survive.

But it took a took a great deal of luck (something Tom Buergenthal would fully understand) on Otto’s part to make it.  As he explained in a letter written June 8, 1945: “In November 44 I was so weak from work and lack of food that with the help of a Dutch doctor I was admitted to the hospital, and I regained my strength there until the Russians liberated us on January 27, 1945.”

In an earlier letter Otto, who stood 6’ 1’’ tall, provided additional detail: “If I hadn’t been taken to a hospital—I was weak and weighed [less than 115 lbs.]—there is no way I would still be alive.  I was lucky & had good friends.  Peter van Pels . . . was like a son to me and did everything to help me.  Every day he brought me extra food.”

As liberation approached, there was one further stroke of luck: “On the 26th [of January 1945] we were taken out [of the infirmary] by the S.S. to be killed, but someone called the S.S. away before they could do that—it was a miracle!”

Now, Otto’s next agony began.  Where was his family?

In his very first letter following liberation [February 23, 1945] and while still in Auschwitz, Otto wrote his mother, “I don’t know where Edith and the children are, we were separated on September 5, ’44.  I only heard that they were transported to Germany.  We have to hope that we’ll get them back healthy.”  [By this time Anne and Margot were likely victims of a typhus epidemic that was raging through the overcrowded and unsanitary conditions prevalent in Bergen-Belsen.  The actual date and cause of their deaths remains unknown.]

All the while Otto was trying to return home.  His circuitous journey—similar to many displaced persons—ran from Auschwitz to Kattowitz (now Katowice, Poland) to Czernowitz (now Chernivtsi, Ukraine), to Odessa, then by steamship through the Dardanelles to Marseille, and then finally overland to Amsterdam.  While in Kattowitz he again wrote his mother: “You will understand how much it tortures me not to know where Edith and the children are.  But I still hope to see them all safe and sound.”

But soon the first shoe dropped.  In Otto’s second letter from Kattowitz he confided what he had learned from a woman he just met: “I just got the news of Edith’s death on 1/6/45, and it has hit me so hard that I am not entirely my old self.  Only the thought of the children keeps me going. . . . .  If she could have held out only two more weeks then the Russians would have liberated her too and it would have turned out differently.”

In a letter to his mother dated May 15, 1945, Otto continued: “All my hopes are for the children. I cling to the firm belief that they are still alive and that we will be together soon.”

Less than a month later [June 8] he lamented, “I don’t know where [the children] are and I never stop thinking about them.”

By July Otto had arrived in Amsterdam and quickly learned the worst: a Red Cross listing of the dead included “Annelies Marie Frank” and “Margot Betti Frank.”  He tracked down the name and address of Lien Brilleslijper, the woman who had filed the report of their deaths.  Brillesjper and her sister had been in Bergen-Belsen with Anne and Margot.  She described to him the charnel house conditions that prevailed there as the war drew to a close: more than 35,000 prisoners died of disease, sickness and malnutrition in the three and a half months between January 1945 and the camp’s liberation on April 15.

In his May 15, 1945 letter, Otto had also commiserated: “All our possessions are gone. There won’t be a pin left, the Germans stole everything—not a photo, letter or document remains.”  But this was not entirely true.  On August 19, 1945 (76 years ago today), Otto observed for the first time “I don’t have any pictures from the last few years of course, but Miep was somehow able to save an album and also Anne’s diary.  I still don’t have the strength to read it.”

Eventually Otto worked up the courage to read what his dead daughter had written while in the Secret Annex.  He was astounded:

“What I read is indescribably upsetting, but still I read it.  I can’t describe it to you, I’m not done reading it yet and want to finish reading through the whole thing before I make any excerpts or translations. Among other things she describes her feelings in puberty with unbelievable self-awareness and self-criticism.  Even if it wasn’t Anne who had written it, it would still be so moving.  What a terrible shame that this life was snuffed out!”

Now, instead of avoiding the diary, Otto couldn’t leave it alone.  In a later letter he wrote, “I can’t stay away from Anne’s diaries and they are so unbelievably moving. . . .  I can’t let the diaries out of my hands, there is too much in them that is not intended for anyone else.”   And again, in a subsequent letter:

“You can’t even imagine everything that is in it. . . .   It’s about everything that happens in a group of people while they are in hiding, all the fears and conflicts, all the arguments, the food, politics, the Jewish question, the weather, moods, education, birthdays, memories: everything.”

Ultimately, Otto overcame his initial reluctance, mindful of Anne’s expressed desire to become an author, and decided he needed to share Anne’s story—suitably edited—with the wider world.  The Dutch version appeared in 1947, followed by translations in Germany, where it sold moderately well, France, and Great Britain.  It finally appeared in the United States in 1952, published by Doubleday after approximately ten other publishers had passed on it.  Eleanor Roosevelt, in her Introduction, wrote that it was “one of the wisest and most moving commentaries on war and its impact on human beings that I have ever read.”

However, it was only after the theatrical version (in 1955) and especially, the movie version (in 1959) that the diary became a permanent bestseller worldwide.  With acclaim, however, came a backlash, and Otto Frank spent much of the succeeding years seeking redress from the many Holocaust deniers and extremists who claimed that the diary was a fraud, a fake, a forgery.  [At a bookfair in central New Jersey a few years ago I even had someone approach me, asking me if Odd Nansen’s diary was anything like “the so-called diary of Anne Frank.”]

Although Otto Frank eventually remarried, and lived to see Anne’s diary become a worldwide phenomenon, with millions of visitors to the Anne Frank house in Amsterdam, he never really recovered from the trauma of the Holocaust.  How could he? The agony of uprooting to flee persecution; the agony of a life in hiding, fearing discovery; the agony of trying to survive in Auschwitz; the agony of losing his entire family; the agony of discovering Anne’s genius—posthumously; the agony of confronting naysayers.

In a very real sense Otto Frank’s agony only ended with his death, forty-five years ago today, on August 19, 1980. He was 91 years old. 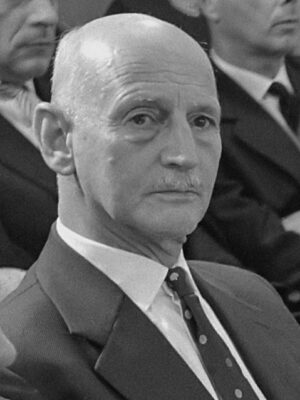 Postscript:  The fate of the remaining occupants of the Secret Annex:

Auguste van Pels was sent from Auschwitz to a subcamp of Buchenwald and later died in transit from Buchenwald to Theresienstadt in March or April, 1945, most likely of typhus.  She was 44 years old.

Peter van Pels took part in the Auschwitz Death March to Mauthausen, where he fell ill and died on May 5, 1945, five days after Mauthausen was liberated.  He was 18.

Fritz Pfeffer was sent from Auschwitz to Sachsenhausen in late October 1944, and from there to Neuengamme, where he died on December 20, 1944, age 55, most likely of dysentery or cholera.