The Power of Conscience: Hiltgunt Zassenhaus

Today is Hiltgunt Zassenhaus’s birthday. Were she still alive, she would be 104. 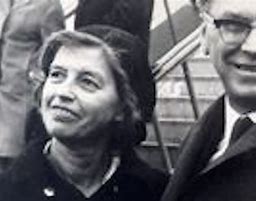 Never heard of Hiltgunt Zassenhaus? Then read on:

In his diary entry for Saturday, April 7, 1945, Odd Nansen writes about how the Swedish Red Cross has been collecting all the Norwegian prisoners in Europe at Neuengamme, a concentration camp located near the Danish border. One such prisoner, a friend of Nansen’s named Leif Poulsson, has just arrived, in terrible physical shape. Nansen describes Poulsson’s harrowing journey: “Since [being at Natzweiler, a notorious camp] he had been in several camps and suffered with others, until at last he landed in a camp south of Stuttgart. . . . This was the worst of all the camps he had been in. There everyone was starving. The camp was so tucked away that the Swedes would scarcely have found it if the Norwegian seamen’s pastor in Hamburg hadn’t been so indefatigable in tracing the Norwegians who were hidden away there. At last he found it out, and the Swedish relief commission came at the eleventh hour.”

Now, how did the Norwegian Seamen’s pastor in Hamburg possibly know where Poulsson and other Norwegians were being kept? Enter Hiltgunt Zassenhaus.

Born in 1916 into an educated Hamburg family, Zassenhaus made a fateful decision early in life: to study Scandinavian languages in college. This initially led to a cushy job—official interpreter to the Court of Hamburg. But when World War II began, Hiltgunt was pressed into service of a much different character: to read—and censor—letters from the Jewish inhabitants of Polish ghettos to their friends and relatives in Scandinavia. Rather than ripping up letters pleading for food (as per her Gestapo instructions), she often added her own requests in the margins of the letters, for food and/or clothing, and smuggled them out of the country through a friend.

Later, Zassenhaus decided she could be of greater benefit as a physician, and began to study medicine. And yet again she was reluctantly pressed into service by the German Justice Department, this time to accompany clergy from the Norwegian Seamen’s Church, who were permitted to visit prisoners. Her task was once again to censor each meeting, and especially to ensure that no prayers or sermons were uttered during the visit. Again, rather than follow orders, Zassenhaus soon began to secretly smuggle food, medicines, and writing materials into the prisons—right under the jailers’ noses. Risking certain death with each visit, yet laden with a bulging suitcase, Hiltgunt bluffed her way past suspicious prison authorities who were even more fearful that she might well be a secret Gestapo agent herself, sent to spy on them.

As helpful as Hiltgunt’s actions were, she had one additional, even more critical, role to play. As Scandinavian prisoners were shunted from prison to prison, Zassenhaus, having developed personal relationships with many of them, insisted on visiting her charges wherever they were relocated. To keep track of all these movements (involving 52 different prisons), Zassenhaus developed a detailed card system for each prisoner, tracking their every move.

In the spring of 1945, Count Folke Bernadotte, head of the Swedish Red Cross (and a personal friend of Odd Nansen’s) personally negotiated permission from Heinrich Himmler to assemble all Scandinavian prisoners into one camp—Neuengamme—with the ultimate goal of repatriating them safely home as soon as possible. This effort, dubbed the “White Buses” operation for the white-painted Red Cross buses involved, suffered from one serious obstacle—no one in the Swedish Red Cross knew where all the Scandinavian prisoners were located, and if Himmler knew, he wasn’t talking. 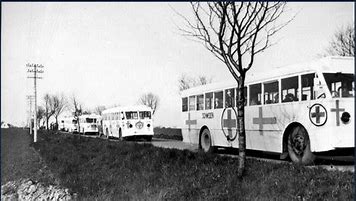 The key to this dilemma could be found in Zassenhaus’s card tracking system. As she later wrote: “[W]henever a prisoner could not be located, my file gave the answer.” Her incredible story is fully told in her memoir, published in English in 1974: Walls: Resisting the Third Reich—One Woman’s Story (more about the book here).

Zassenhaus is the only German ever to be awarded Norway’s highest civilian honor, the Order of St. Olav, bestowed as “a reward for distinguished services rendered to Norway and mankind.” (In this she shares something in common with Odd Nansen, who also received the award, in 1970.) In 1974 Norway went even further—its government nominated Zassenhaus for the Nobel Peace Prize.

Despite all the dangers Hiltgunt faced in providing aid and comfort to her prisoners, she never flinched, and never wavered from her conviction that her cause was just. She once remarked: “[E]ven in the most desperate circumstances we as individuals can make choices. This is what humanity is about: we must never cease to listen to our conscience. It guides us toward serving life, then we are on the right course.”

I think that is a sentiment that Odd Nansen would have wholeheartedly supported.

After the war, Zassenhaus completed her medical studies, emigrated to the U.S., and in 1952 opened a medical practice in Baltimore. Hiltgunt Margret Zassenhaus died on November 20, 2004, age 88. On her grave is inscribed (from I Corinthians): Die Liebe gibt nicht auf [Love never fails]. 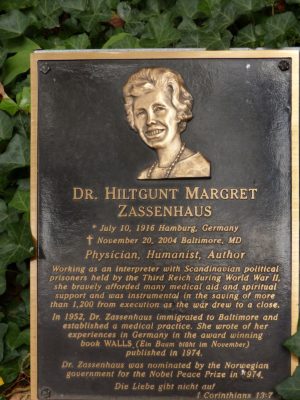 Portions of this blog first appeared on November 20, 2016.