“The news was excellent—but still with no essential points.  There has been sabotage in Vemork.  The heavy-water works are destroyed.  Four Norwegian-speaking men in English uniform got away. . . .   Yes, there are a few things going on—that one must admit.” 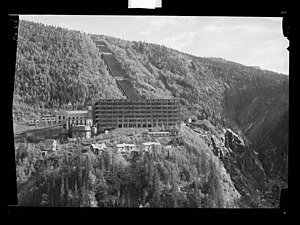 Did the members of Operation Gunnerside understand the importance of their mission?  Probably not.  To do so would have required an advanced degree in nuclear physics.  They were simply told that their mission was critical to the war, and, if successful, would be written about long afterward.

The Vemork hydroelectric plant—the world’s largest when it came on line in 1911, was originally dedicated to the production of fertilizer.  Only years later was it discovered that Vemork’s abundance of both water and electric power could be employed in the production of “heavy-water,” so-called due to the presence of an additional neutron in the H2O molecule.

Even then, heavy water was something of a mystery: what was it any good for?  No one really knew.  It was only when nuclear physicists discovered that heavy water made an excellent “moderator,” controlling the process of nuclear fission—and thus enabling the construction of a nuclear reactor and, ultimately, an atomic bomb, that the true value of Vemork’s unique heavy water plant was recognized.

With their invasion of Norway on April 9, 1940, control of Vemork passed into German hands.  Soon, it was apparent that German demands for ever increasing amounts of heavy water from Vemork signaled that they were pursuing their own research on an atomic bomb.  To the Allied Powers this possibility was unacceptable.

The first British Special Operation Executive (SOE) attempt to sabotage Vemork (Operation Freshman), which took place on November 19, 1942, was a total  failure, resulting in the loss of 41 men.  Equally concerning, Operation Freshman alerted the Nazi occupiers of the Allies’ intentions, leading to increased security at the plant: additional guards, searchlights, mine fields, etc.

Nevertheless, faced with such daunting obstacles, the Gunnerside team successfully scaled down a sheer, 660 ft. ravine, crossed a narrow river, and scaled back up the opposite side, to reach the remote ledge where the plant was located.  Entering the plant without detection, the demolition squad set delay fuses to allow time for escape.  All told, over 1,000lbs of heavy water, as well as associated equipment, were destroyed.  There were no casualties. 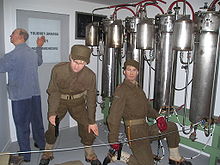 Recreation of the heavy water sabotage

Despite a search effort involving 3,000 German soldiers, none of the Norwegian saboteurs were caught, even though five members skied—in uniform—200 miles to safety in Sweden (two escaped to Oslo and four remained in the area for additional resistance work).

The SOE later considered Operation Gunnerside the most successful act of sabotage in WWII, and the German military commander of Norway, General von Falkenhorst, called it “The finest coup I have seen in this war.”

Joachim Rønneberg, the last surviving member of the Gunnerside operation, passed away on October 12, 2018, age 99.  I have previously written about Rønneberg here.  With Norway’s medal performance in the Winter Olympics still fresh in our minds, it is worth noting how Rønneberg described his 200-mile ski escape to Sweden: “The best skiing weekend I ever had.” 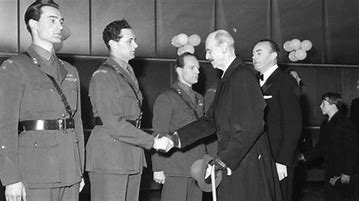 Operation Gunnerside members being congratulated by King Haakon VII. Rønneberg is on the far left.