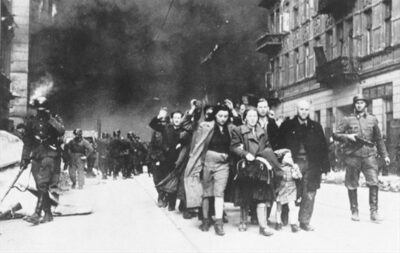 In an earlier blog (here) I described the creation of the Warsaw Ghetto, and its partial liquidation beginning on July 22, 1942 and lasting until September 21, 1942, resulting in the deaths of 250,000—300,000 Jewish inhabitants, all as described in the diary of Mary Berg.

By January 18, 1943, nearly four months had passed without a single deportation (Treblinka was being kept busy by deportations from other Jewish ghettos in Poland, including Tom Buergenthal’s Kielce Ghetto).  On that date, Mary and her family were moved to an internment camp in France.  And on the same day those remaining behind were left to face renewed deportations.  Here is how The Holocaust Encyclopedia describes the events:

“On 18 January 1943 a second wave of deportations began.  This time Jews who were ordered to assemble in the courtyards of their apartment buildings refused to comply and went into hiding.  The first column that the Germans managed to round up in the early hours, consisting of some 1,000 people, offered up a different kind of resistance.  A group of fighters . . . armed with pistols, deliberately infiltrated the column, and when the signal was given, the fighters stepped out and engaged the Germans in hand-to-hand fighting.  The column dispersed, and news of the fight soon became common knowledge.  The whole action lasted only a few days, by which time the Germans had rounded up about 5,000-6,000 Jews from all parts of the ghetto; after the events of the first day hardly any Jews responded to the German order to report.

The fact that the action was halted after a few days, and that the Germans had managed to seize no more than 10 percent of the ghetto population, was regarded by Jews and Poles alike as a German defeat. . . .   [T]hese deportations had a decisive influence on the ghetto’s last months.  The Judenrat and the Jewish police lost whatever influence they still had; the fighting organizations were the groups that were obeyed by the population.  The Jewish resistance also impressed the Poles, and they now provided more aid to the Jewish fighters.  The ghetto as a whole was engaged in feverish preparations for the expected deportations.  The general population concentrated on preparing bunkers. . . .   Much thought went into the planning of the sophisticated entries and exits of the subterranean hiding places. . . .   Water, food, and medicines to last for months were stockpiled.”

While it is appropriate to focus on the heroic actions of the poorly armed but highly motivated resistance fighters of the Warsaw ghetto, one should not lose sight of the enormous human suffering even those few days in January 1943 produced.  According to historian Martin Gilbert, among those deported were 150 doctors and all the patients at the ghetto hospitals.  The crowds also included a well-known cantor of pre-war Warsaw, Meir Alter, and Alter’s father.  On the way to the Umschlagplatz, the transit assembly area, Alter fils supported Alter pere, who was blind and moved with difficulty.  When the SS escort asked why the old man did not walk by himself, Alter explained that his father was blind.  “The Nazi fired a shot, ‘killing the blind man instantly. . . . ‘”

Similarly, on January 19, when the Germans once again entered the ghetto, David Wdowinski went into hiding.  Again, there were the familiar German voices, the heavy footsteps, the alarming hammering, according to Wdowsinski.  As he later recalled:

“A child began to cry.  Fright, alarm—we’ll be betrayed.  The mother closed her hand tightly over the child’s mouth and nose.  The crying stopped.  The child was quiet, very quiet.  The German went away.  The quiet child was a little bluish and from his mouth issued a small stream of bloody foam.  It was never to cry again.  So went a Jewish child into another world.”