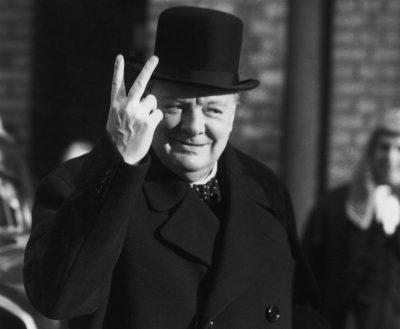 Fifty-six years ago today, Winston Churchill passed away, age 90.  I’ve written about him before (here, here and here).

Like many larger-than-life figures, especially one in the public eye for much of his life, Churchill has his share of supporters (most recently Erik Larson) as well as his detractors.  He certainly made his share of mistakes, and held views that have not always stood the test of time.

But for today I’ll focus on a contemporary account of Churchill which sheds some light on how he was viewed in his own time, and by a people who had never voted for him, nor even in most cases spoke his language.

For this I turn to my old friend William L. Shirer.  In his book, End of a Berlin Diary, he recounts visiting Paris on November 11, 1944, just months after it had been liberated, to attend the Armistice Day commemoration.  He reflected on how, previously, with “each year . . . less people turned out on the Champs-Élysées on Armistice Day.”  But on this first Armistice Day since liberation, “a crowd of a million Parisians . . . lined the Champs-Élysées from the Arc de Triomphe to the Place de la Concorde.”

“At first, during the early morning when [the Parisians] were gathering on the avenue, they struck me as being in a subdued state of excitement.  They had to pinch themselves to believe that what they were doing and seeing this day, that they were—free again—was all true. . . .

Then suddenly something happened.  All the pent-up feelings of years exploded.  I don’t think I had ever seen this before.  It was just before the traditional hour of eleven a.m.  Down toward the Place de la Concorde we heard the cheers break out.  But it wasn’t ordinary cheering.  It was a mighty roar—even in the distance. Where I was, nobody knew why. . . .   De Gaulle would be in the first [car], standing stiffly, saluting.  He was popular because of what he had done.  But he was not the sort of man to set crowds afire.

And then we knew.  The cars approached.  De Gaulle was in the first one all right, standing stiffly and saluting.  It was what was at his side that set the sparks off.  Standing at his side was Winston Churchill. . . .  At this moment he became, for the moment, a great symbol to these people, the symbol of France’s liberators.  And because not a single one of the million people had expected to see him at this instant, the complete surprise and lightning-sure recognition of the man they knew as the one who, above all others, had saved them, touched off the explosive materials that had lain long and deep in all of them.  For security reasons . . . the public had not been told that Churchill was in Paris or even in France.

At the sight of him there was bedlam.  Now you could really see human beings mad with joy.  They shouted wildly, gripped by a wonderful hysteria. They shouted and stamped and gesticulated and crawled on one another so that their eyes would not lose sight of the man.  After he passed, there was a reaction.  Several around me were in tears. . . .  Gratitude is not very plentiful in this world; but today the French, who are not noted for it, had it.”