Wow! A New Play Based on Nansen’s Diary!

No sooner than I had just finished posting a new blog describing my recent article in the Scandinavian Review about Odd Nansen and his art world, featuring fellow Grini prisoner Per Krohg, among others, I learned yesterday about a new play called “The Bøyg,” written by A.J. Ditty.  According to Ditty, the ostensible protagonist in the play is the very same Per Krohg, and the play’s action is derived from diary entries in Odd Nansen’s From Day to Day: One Man’s Diary of Survival in Nazi Concentration Camps.  Ditty calls Nansen’s diary “an extremely important primary text for this play.”

The Bøyg will be performed tomorrow, September 26 at the Stockbridge Theater in Derry, NH at 2pm.

Ditty describes his play as “a lot about making art in isolation.” It focuses on events described by Nansen in his diary in late December, 1942.  At the time the prisoners were preparing to celebrate Christmas—the first Christmas many of them will have ever observed in prison, and they struggle to preserve a sense of home.

The Bøyg is an amorphous character (really, just a voice) in Henrik Ibsen’s play Peer Gynt.  Published by Ibsen in 1867 and first performed in 1876, with musical accompaniment by Edvard Grieg, it remains one of the most widely performed Norwegian plays. 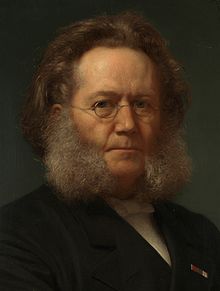 Ibsen based his verse play loosely on an earlier Norwegian folktale, Per Gynt.  In my article in the Scandinavian Review, I focus on Norway’s “tightly interconnected web of artists.”  That web—and the Lysaker Circle I describe—also included writers as well.  The Per Gynt folktale was first recorded and collected by Peter Christen Asbjørnsen.  Asbjørnsen also collaborated with Jørgen Moe in a collection of Norwegian folktales which became so famous it was simply referred to as “Asbjørnsen and Moe.”  Who illustrated Asbjørnsen and Moe?  None other than Erik Werenskiold, Fridtjof Nansen’s friend and neighbor, and a leading member of the Lysaker Circle.  Tightly interconnected indeed.

Ditty was recently interviewed by New Hampshire Public Radio about his play, which interview can be heard in full here.