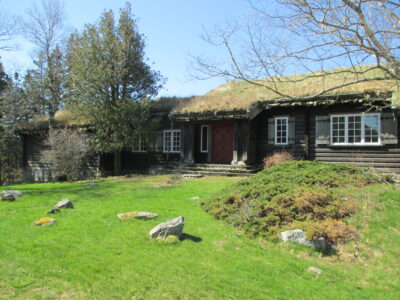 “. . . I have actually been busy.  I’ve begun drawings for our cottage on the scale of 1:50, after thinking and dreaming of it for years.  I am dreaming myself so intensely into this cottage with all its details and rooms that I actually long to get to ‘work’ every day.  I feel as if I had time for nothing else.”

The Norwegian word for cottage is hytte (pl. hytter), pronounced hoota. It is most likely derived from the same root that brings us the English word hut.  Hytter are a very big deal in Norway, seemingly the more primitive and inaccessible they are, the better.  In fact, Odd Nansen was enjoying a holiday with his family in a hytte owned by his business partner on the night he was arrested in January 13, 1942.

Dreaming about and planning his own hytte was undoubtedly one of the few mental escapes available to Nansen while a prisoner, and he refers to this pastime in several of his entries.  Nine months’ earlier (January 26, 1944): “I’m well off just now.  Designing a cottage for myself. . ..“  As early as February 24, 1942, less than two months into his captivity, Nansen notes that more and more of his fellow prisoners are asking for house and hytte designs.  Unfortunately, he resignedly complains, many of these prisoners are self-styled amateur architects who insist on “enforce[ing] their views on architecture, so that the problems gradually become comprehensive and downright wearing.”

Anyone reading From Day to Day already knows that Odd Nansen was a talented artist, portraitist, caricaturist, and wood carver.  But was he an equally good architect?

Certainly, Nansen showed early promise.  At the tender age of 29, while living and working in America, Nansen entered a contest to design the prototypical airport of the future.  Of the 257 entries submitted, Nansen’s design was awarded third place—an impressive achievement for someone so young and new in his profession.

So far as I know, there is only one structure in the U.S. that bears Nansen’s design: a hytte (naturally) located on a small island lying off the coast of Maine.  Known as Norminde (meaning “memory of the north”) it was designed by Nansen in the mid-1950s for the then U.S. Ambassador to Norway, L. Corrin Strong.  One of Strong’s sons married a local Norwegian girl, whose family owned a hytte designed by Nansen before the war.  Strong senior and his wife Alice were so impressed by what they saw, they commissioned Nansen to design a hytte for themselves as well.

Ambassador Strong, who was apparently independently wealthy, went one unusual step further: he had the hytte initially constructed in Norway, allowed it to season for a year, whereupon it was disassembled—piece by piece—and shipped to the family property off the coast of Maine.  There it was reassembled—piece by piece.  It remains in the Strong family to this day.

Recently, the magazine Old House Journal ran a feature story on Norminde.  While the author of the article manages to get just about every fact concerning Odd Nansen and Tom Buergenthal wrong, the value of the piece lies in the sumptuous photos of the cottage’s exterior and interior.  A link to the full Old House article is here. 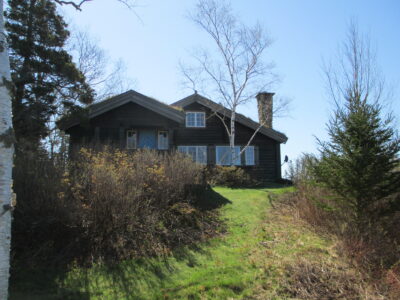 The photos reveal an incredible attention to detail—Norwegian detail—in the use of wood, paint, and stone.  Nothing is commonplace; Nansen must have thoroughly enjoyed the commission.  The result is a gorgeous piece of authentic Norway come to America.  The cottage’s unique features lend it to periodic laudatory articles in various design journals, of which Old House Journal is but the latest.

So, now, are you envious?  Interested in adding a bit of Norwegian flair to the old homestead?  Hoping to increase your supply of that elusive Hygge? Well, then I suggest you get started by measuring your roof for how much sod it will need.  And, while you are at it, pick up a good scythe……

[A special shout-out to my friend Frank Schaberg, who first called my attention to this article.  Thanks Frank!]