On this date in 1944, U.S. Naval Task Group 22.3 captured German U-boat U-505 on the high seas near the Cape Verde Islands.  It was the first successful capture by the Navy of an enemy ship on the high seas since the War of 1812. 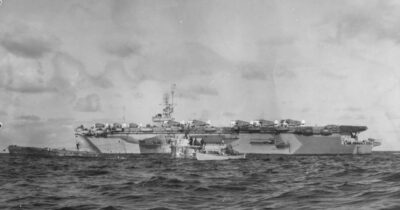 USS Guadalcanal alongside the captured German U-505

I first became aware of U-505 while doing research on Odd Nansen’s diary, From Day to Day.  On September 19, 1943, Nansen describes the following somber scene: while reading an old newspaper, one of Nansen’s fellow prisoners, Ole Iversen, learns that his son, Magnus Iversen, age 25, died months earlier when his ship was lost at sea.  By Googling “Magnus Iversen,” I discovered the ship on which he served was the M/T Sydhav, an oil tanker.  By Googling “Sydhav” I discovered that it was torpedoed off the coast of west Africa on March 6, 1942, with the loss of 12 of the ship’s crew, by U-505.  Nansen relates: “Poor Iver. . . .  [H]e took it fearfully hard.  He just went and lay down on his bunk, lay down and shook with sobs.”

By June 1944 the so-called “Battle of the Atlantic,” the effort to keep the sea lanes open on the Atlantic Ocean, especially the critical routes between America and Great Britain, had long since turned in favor of the Allies in two respects: 1) the total tonnage of merchant shipping—Britain’s lifeline—lost to U-boats began to fall below the amount of new ship construction, and 2) the number of German U-boats destroyed began to outpace the rate at which new U-boats were being added to the fleet.

Task Group 22.3 consisted of one escort carrier, USS Guadalcanal, and five fast destroyer escorts: USS Pillsbury, USS Pope, USS Flaherty, USS Chatelain and USS Jenks.  The Task Group was known as a “hunter-killer” group.  Its sole function was to chase down and destroy German U-boats.  Its leader, the skipper of the Guadalcanal, was Captain (later Admiral) Daniel Gallery.  A 1920 product of the U.S. Naval Academy, Gallery came from a family of high achievers: two of his younger brothers also became admirals. (Another brother, John Gallery, might also have reached that rank had he not chosen to become a priest instead—where he settled for being a Navy chaplain.) 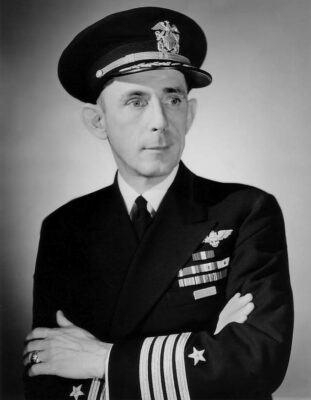 Gallery was nothing if not an independent thinker. [Fridtjof Nansen would have loved him.]  His task group became the first to successfully pioneer night-time carrier landings.  Until then, using carrier-based aircraft, for combat or reconnaissance, was strictly a dawn-to-dusk operation.  At the time German U-boats needed to periodically remain on the surface to recharge the batteries which powered them while submerged.  By 1944 the U-boats had long since learned to surface and recharge only at night.

By implementing 24-hour, round the clock aerial surveillance, TG 22.3 took away the U-boats’ last refuge.  Indeed, on the first night of aerial patrolling, the Task Group tracked down U-515 and sank it.  On the very next night it located U-68 and destroyed it as well.

But Capt. Gallery was after bigger game. He wasn’t content to merely hunt and destroy; Gallery wanted to capture a U-boat intact.  Accordingly:

“We . . . determined, in case opportunity arose in this cruise, to assist and expedite the evacuation of the U-boat by concentrating anti-personnel weapons on it, to hold back with weapons that could sink the sub, and to attempt to board it as soon as possible.   This was discussed at the departure conference of all Commanding Officers before sailing, and all the ships were ordered to draw up plans for capture and to organize boarding parties.”

In June 1944, with the aid of Ultra (the Allies’ reading of the Enigma Code), Gallery was notified that U-505 was nearby, close to the Cape Verde Islands.  Despite being very low on fuel and overdue for refueling in Casablanca, Gallery decided to take up pursuit.  Sure enough, planes from the Guadalcanal soon discovered U-505 and both they and the destroyer escorts attacked with depth charges, forcing the damaged and leaking ship to the surface.  U-boat captain, Harald Lange, soon gave the order: “Abandon ship!”

In the ensuing melee no one aboard U-505 thought to open all the seacocks to scuttle the boat.  As one writer points out: “The Germans . . . considered the capture of a U-boat at sea so unlikely training for such an event would have been a waste of time.”  Only one young sailor, Hans Goebeler, had the presence of mind to open one strainer valve to flood the ship. [Goebeler would ultimately move his family to America after the war, where he wrote a memoir of life in a German U-boat.]

While U-505’s crewmembers were bailing from the boat to save their lives, a boarding party, especially trained for just such an event, was speeding from USS Pillsbury to the stricken ship.  The head of the American boarding party, Lieutenant (j.g.) Albert David, had no idea, as he clambered down the main hatch, if 1) the boat was booby-trapped to explode, 2) there were armed German sailors still aboard to contest any takeover, or 3) whether he could even stabilize the damaged and alien craft before it sank and took him and his boarding party down with it.  David would later receive a well-earned Medal of Honor for his heroics, the only Medal of Honor awarded in the Atlantic Fleet during World War II.  Two Navy Crosses and a Silver Star were also awarded to crew members for their actions that day.  Gallery received a Distinguished Service Medal and the Task Group a Presidential Citation. 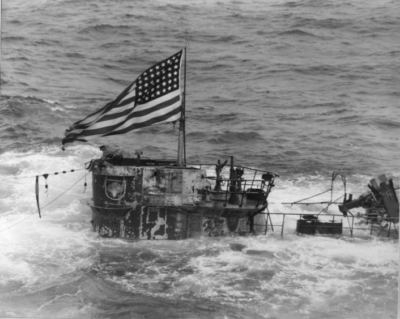 David and his crew succeeded in closing the strainer, stabilizing U-505, and attaching it to a tow line from the Guadalcanal.  Thus began the tedious return journey (together with all but one of the members of U-505 crew–now as POWS) across the Atlantic Ocean to Bermuda.  Once there, the Enigma machine and all the invaluable code books seized from the sub were immediately flown to the US mainland for cryptographic analysis.

Capt. Gallery had done the near-impossible—what a PR coup for the U.S. Navy!  There was but one big hitch: By publicizing the capture of U-505, the Allies would also be disclosing to the Germans that their top-secret Enigma codes were now also in Allied hands, compromising all of their important communications.  Once so notified—or even if only suspected—the Germans would instantly change all their Enigma settings.  Inasmuch as the capture of U-505 occurred 48 hours before D-Day, the ambitious cross-channel amphibious assault on Normandy, France, any changes to Enigma would have been an enormous potential setback.

So the triumph of TG 22.3 had to be kept secret for the time being.  The sailors aboard the Task Group were required to sign an oath of silence, “on penalty of death.”  U-505 was quickly repainted and rechristened the USS Nemo (with a tip of the hat to Jules Verne) to avoid any nosy questions.

The German POWs were confined to a specially built camp in Louisiana, and, contrary to the provisions of the Geneva Convention, were not allowed to notify their families of their status. Such families were naturally forced to conclude that U-505 had been lost as sea, an increasingly common occurrence for German U-boats in the summer of 1944. It was not until the war ended that these families learned for the first time the miraculous news that their loved ones were actually alive and well.

The capture of U-505 is an amazing adventure tale.  But its capture is only one-half of its incredible career.  For rather than being junked by the U.S. Navy after the war, the boat ended up on display at Chicago’s Museum of Science and Industry.  On a recent trip to Chicago to speak to the Norwegian-American Chamber of Commerce, I had a chance to tour the U-505.

How this deadly German warship ended up on display in Chicago is another amazing tale.  But that is a tale for another day!  Stay tuned!