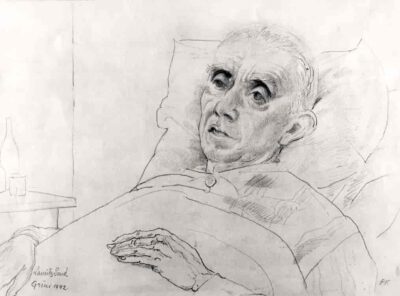 Lauritz Sand. Drawing believed to be by Odd Nansen’s friend Per Krohg.

Lauritz Sand was born in Trondheim, Norway on October 1, 1879.  Like Odd Nansen, Sand was artistic, and like Odd Nansen, he studied architecture.  When his artistic career failed to get off the ground, he elected to pursue a military career instead, with the Royal Dutch East Indies Army.

Following his retirement from the military in 1906, Sand turned to managing plantations in the Dutch East Indies, becoming the superintendent of the Anglo-Dutch Plantations in 1922.

Sand returned to Norway in 1938.  Soon after the German invasion in April, 1940, he began to apply his military and managerial skills to resistance work.  He was an early member of the military intelligence organization XU (which he may have had a hand in naming), for which he mapped German military installations in Norway.  When XU was infiltrated by the Nazis, Sand was arrested in September 1941, and brought to the notorious Victoria Terrace for interrogation.  Despite extensive and repeated torture, he gave only a one-word answer to all questions put to him: Nei (No).

“Easter Eve!  Thanks to high-mindedness and generosity we had only one hour’s extra work today.  This was an Easter gift to the prisoners, which was announced on parade at one o’clock.  The prisoners showed a commendable mastery of their rejoicing: a pale smile brushed as it were over the tired faces.

We held a short entertainment in the hospital this afternoon.  All the patients were lying or sitting out in the long corridor.  The “stage” was just outside Sand’s door.  Sand’s?  Or was it the ghost of Sand I saw there, propped up in the bed with pillows?  A white-haired, emaciated old man, staring in front of him and sucking mechanically at the pipe he could just hold onto with the hand that was free from bandages and plaster.

He nodded faintly to me when I sat down; I nodded back; it struck me there was something familiar about the man.  Thus I slowly recognized him, feature by feature.  It was actually the Sand I knew, the Sand I had lunched with almost daily last spring and summer.  Last summer he was going around brisk and springy.  Now he was a broken man; his eyes sat deep in his skull; his cheeks had fallen in; his neck and chin had dried up and contracted.  I saw that he could not move. The only living thing about him was his eyes, deep down in their sockets.  I don’t know what the gangsters have done to him, and I don’t want to ask.  It must be an atrocious thing that can change a man so.  His arm was broken in two places, all the fingers of his right hand were out of joint, his whole body seemed an affliction.  He got part of this treatment at the Terrace, part of it here.  And it is known who are guilty.  I don’t know how I managed to perform this evening, only that I got up in my turn and repeated Norsk sang, by Collett Vogt, to Sand, to Sand alone, and tried to put into it all I felt he was a martyr for.  I had such a desire to tell him right out that I was burning with pride to be his countryman.  But there was a guard standing motionless outside his door, and I could see he understood Norwegian; he was following the program with his face.  When I had said the poem, I moved; I couldn’t sit any longer facing Sand’s door and looking at him.  I was to sing some lively songs for the patients, and how was I to get through them with Sand before my eyes?  The hell of the German concentration camp is no longer in Germany alone.  It makes one shiver to think what may happen before this nightmare is done with.  It’s said they told Sand that as soon as he recovers they will smash him to bits again until he talks.” (Saturday, April 4, 1942) 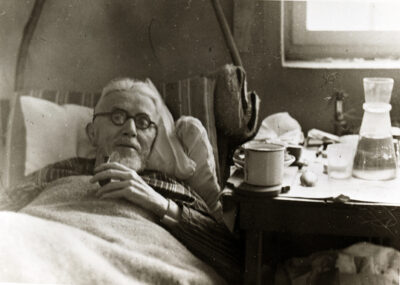 Lauritz Sand recuperating in bed. Note the pipe in his left hand.

“Truth to tell, holidays in prison soon lose their charm.  There’s miserably little to do.  I can’t lie sleeping all day, and this morning I took refuge with Sand up in the hospital for a couple of hours.  He likes a chat, likes to be “received again” among the living.  He is now decidedly in a fair way to get better.” (Saturday, December 26, 1942)

In the closing days of the war, Sand was notified that, as a result of his continued intransigence, he would be executed by firing squad on May 17, 1945.  Only Germany’s unconditional surrender on May 8, 1945, spared him from this fate.

Although Lauritz Sand never fully recovered—physically or mentally—from his four-year ordeal, he devoted himself for the remainder of his life to working on behalf of war veterans.  And, miraculously, despite all the abuse he had experienced, Lauritz Sand lived for another eleven years, dying 66 years ago today (December 17, 1956) at age 77.

King Haakon did not forget Sand’s service.  He visited Sand in November 1945 while he was still recuperating in the hospital, and made him a Knight of the Royal Norwegian Order of St. Olav.

In 1952, four years before his death, a bust of Sand, now legendary as “Norway’s most tortured man,” was unveiled just outside the gates of Grini Prison. It contains a single-worded inscription: NEI.   King Haakon and Crown Prince Olav attended the ceremony. 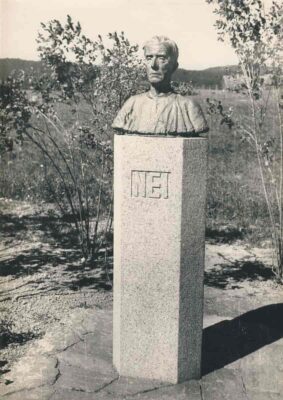 I think we can join in with Odd Nansen when he observed in his diary on Sunday, March 3, 1942: “There is a Norwegian we can take off our hats to.” 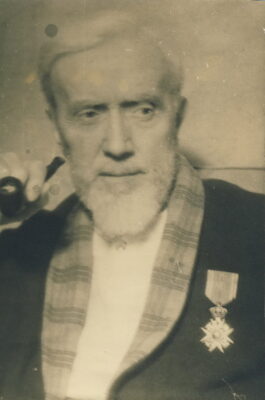 Lauritz Sand with his Order of St. Olav (and his pipe).