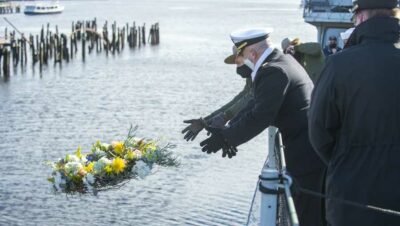 Eighty years ago today the Empire of Japan attacked American forces at Pearl Harbor, Hawaii.  Even today, eighty years later, the words “December 7” and “Pearl Harbor” generate strong emotions.  To use the words of one of my favorite authors, William Manchester, it was an event “which, in retrospect, seems to have been a kind of historical hinge; everything that been, no longer was, and everything that was to be, became.”

Ten years ago today I had the honor to be at Pearl Harbor at 7:55am, under a cloudless blue sky and a bright morning sun, when the tocsin tolled for those who were lost that day. The event was attended by many survivors who were eager to tell their stories—of exactly where they were, and exactly what they did on that fateful day—the memories still burned bright.

The highlight was a visit to the USS Arizona memorial.  At the far end of the memorial is a wall with the names of all the sailors on the Arizona who were killed on December 7, all inscribed on marble slabs.  Particularly poignant is a marble slab which was added later.  On it are engraved a handful of names as well.  These represent survivors of the attack on the Arizona who, fifty, sixty, even seventy years after the event, having lived a full life, still insisted that upon their death their ashes be added to the remains of their fallen comrades who lie entombed below. 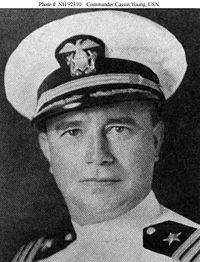 I want to write about another hero of that day: Cassin Young.  Young, born in 1894 and a 1916 graduate of the U.S. Naval Academy, was in command of the repair vessel USS Vestal, which was moored next to the Arizona on December 7, 1941.  Here’s what Richard Ketchum relates in his book, The Borrowed Years 1938-1941:

“The repair ship Vestal, with a complement of some six hundred men under Commander Cassin Young, was tied up alongside the Arizona.  The Vestal had already been hit by two bombs and was afire when the battleship blew up; the vacuum created by the explosion put out the fires on the repair vessel, but the concussion blasted overboard nearly one hundred men, including the skipper [Young].  Debris of every description—huge chunks of metal, unexploded shells, parts of human bodies—crashed down on the deck, and finally someone gave the order to abandon ship.  Before anyone went over the side an apparition appeared—a furious Commander Young, coated from head to foot with diesel oil from the water—demanding of the officer of the deck, ‘Where the hell do you think you’re going?’

‘You don’t abandon ship on me,’ Young announced, and the crew returned to battle stations.”

The citation for the Medal of Honor Young subsequently received further states: “Despite severe enemy bombing and strafing at the time, and his shocking experience of having been blown overboard, Commander Young, with extreme coolness and calmness, moved his ship to an anchorage distant from the U.S.S. Arizona, and subsequently beached the U.S.S. Vestal upon determining that such action was required to save the ship.”  This helped insure its ultimate salvage.

Less than one year later, on November 9, 1942, Cassin Young took command of the heavy cruiser USS San Francisco, which, interestingly, had also survived the attack on Pearl Harbor.  His command was short-lived: only four days later, during the naval battle of Guadalcanal, the San Francisco engaged with a superior Japanese force and Young was killed by enemy fire, one of 77 killed aboard the ship.  He was 48 years old.  In addition to his previous Medal of Honor, Young was posthumously awarded the Navy Cross, the country’s second highest honor.  His Medal of Honor is now on display at the Naval Academy Museum in Annapolis.  I visited the museum several times while my older son, Owen Boyce (USNA 2003) was a Midshipman at the Naval Academy, but never saw it.  Now I have a reason to return. 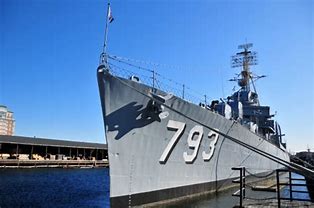 On December 31, 1943, a newly commissioned Fletcher-class destroyer was named after Cassin Young.  The ship saw action in the Battle of Leyte Gulf and the Battle of Okinawa, where she was twice struck by kamikazes. Following her decommissioning she was permanently loaned to the National Park Service to be preserved as a floating memorial ship.  Since then she has been berthed at the Boston Navy Yard, part of the Boston National Historical Park, across from the USS Constitution.  In 1986 she was designated a National Historic Landmark, one of only four surviving Fletcher-class destroyers still afloat.

Today, one of the US Navy shuttle boats taking visitors to the USS Arizona Memorial, hull designation 39-3, is also, appropriately, named for Cassin Young.

My younger son, Patrick Boyce, is a US Park Service Ranger at the Boston National Historical Park, and regularly gives tours of the USS Cassin Young.  He has also prepared several fascinating and informative videos on the Cassin Young and its many components: Coming Aboard; Berthing; Meals and Water; Weapons Systems; Navigation and Communications; and Engineering and Propulsion.  Check them out, and please be sure to ask for him if you are ever visiting the Boston Navy Yard!