Q: Who lit the Olympic Torch to start the 1952 Winter Olympics? 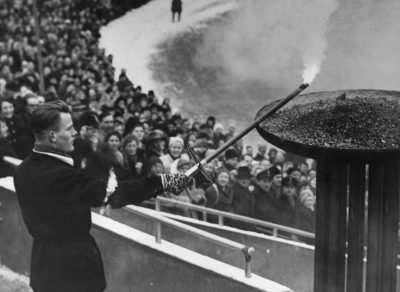 Eigil, then 20 years old, was “ordered” to carry the torch “by my father” he once confessed in an interview.  In fact, he was chosen by the Oslo Olympic Organizing Committee.  In their preparation for the event, they had made it clear that “The skier [lighting the flame] must . . . represent the qualities that Norwegian sports associates with their athletes and their character.”  In lighting the torch, a symbol of international cooperation, Eigil was honoring his grandfather—polar explorer and humanitarian Fridtjof Nansen, who died the year before Eigil was born.  To build suspense, Eigil was also enjoined by his father from telling anyone about his forthcoming role, not even his closest friends.

The Norwegians hosting the Olympic Games were anxious to show the world that their country had recovered from World War II, and five long years of Nazi occupation.  With the world’s attention focused on their country, the organizers devised an event, rich in cultural associations, which would highlight their own unique contributions to winter sports.  How?  By introducing the first Olympic torch relay to the Winter Olympics. [A torch relay, from Olympia, Greece, had been instituted for the 1936 Summer Olympics, and followed thereafter for the Summer Games].

What better place to light the Olympic torch and start the relay than in the hearth of a simple cabin in Telemark, Norway that once was the home of Sondre Norheim (1825—1897), considered the father of modern skiing.  Skiing was already popular in Morgedal, a tiny hamlet in Telemark, and Norheim soon distinguished himself as a master skier.  He won Norway’s first national skiing competition in Oslo (then still called Christiana) in 1868.  [Not surprisingly, when Norheim was invited to the competition, he and two friends for Morgedal skied the entire 140 miles to Christiana just to enter.]  Norheim also developed the Telemark ski, and introduced many technical innovations (different bindings, shorter skis, curved edges, etc.). 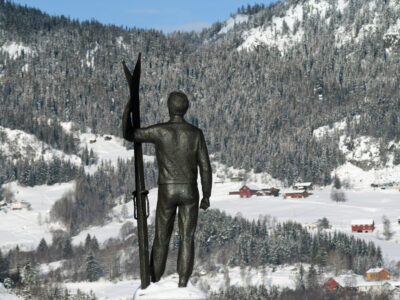 Q: Who was the first to cross Greenland, using skis?

A: Fridtjof Nansen and his team were the first to cross Greenland, using skis.

Even Fridtjof Nansen recognized the skiing prowess of the Telemark skiers: “Telemark is the rightful home of skiing.  The people of Telemark are unquestionably our country’s best skiers, and if they are the best in our country, I can doubtless say, without fear of exaggeration, that they are also the world’s best.”  We can thank Sondre Norheim, who eventually emigrated to the United States and is buried in North Dakota, for introducing the wider world to the words ski and slalom.

Who would have the honor of actually lighting the torch in Norheim’s hearth?

The Norwegians chose Olav Bjaaland (1873—1961).  Bjaaland was also from tiny Morgedal, and like Norheim an excellent skier, winning the Nordic combined at the 1902 Holmenkollen Ski Festival.  More importantly, however, in 1952 he was one of the last living survivors of the five-man team, led by Roald Amundsen, that first reached the South Pole on December 14, 1911.  It was on a trip to Chamonix, France in 1909 for an international ski competition that Bjaaland met Amundsen purely by chance, which led to Amundsen’s invitation to join the expedition (Bjaaland also won the race). 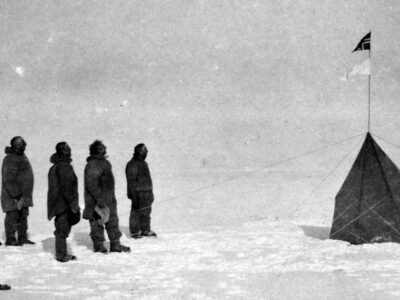 Olav Bjaaland at the South Pole

Q: How did Bjaaland and Amundsen’s expedition sail to Antarctica in 1910?

A: Aboard the Fram, the ship specially designed by and built for Fridtjof Nansen for his expedition to the North Pole (1893—1896).

So, the stage was set: A hero of Amundsen’s expedition would ignite the pine torch in the fireplace belonging to the father of modern skiing, perched high in the mountains of Telemark, Norway.  The authorities naturally wanted to capture this historic event on film.  Only one element seemed lacking: a young child, to symbolize Norway’s future as well.

Here’s where the story takes on a number of comic overtones.  First, the filmmakers needed a young child.  The ultimate ‘winner” of this honor, a young boy named Olav Tveiten, once described in an interview how all this came to be:

“My teacher, whose name was also Olav Bjaaland, and there were a lot of Olavs in Morgedal, asked the class which one of us would go up to Sondre Norheim’s cabin.  No one held up their hand, and so he looked at me and said ‘you go.’  I think it was because I was a good skier, better than most.”

Next came the actual filming.  Although Olav Bjaaland was a near-mythic figure in Norway, by February 1952 he was just shy of his 79th birthday, and at his age following even simple stage directions presented a real challenge.  Bjaaland was supposed to light the pine torch in the hearth, with young Tveiten looking on, turn to his right, and exit the cabin.  Once outside, he would in turn light the torch to be carried by the first of 94 relay skiers.  They would carry it all the way to Bislett Stadium, 140 miles away in Oslo, following roughly the same path used by Sondre Norheim 84 years earlier.

A: Odd Nansen’s close friend, and fellow prisoner in Grini and Sachsenhausen, Frode Rinnan, designed Bislett, and oversaw the renovations undertaken to prepare for the 1952 Games.

Unfortunately, there was one minor glitch in this film script, as described by Tveiten almost 60 years later: Instead of turning right “every time Bjaaland had lit the torch, he’d turn left and run into the wall and we would have to start all over again.” It wouldn’t have been so bad, Tveiten explained, except that it was bitterly cold (-18 F) and the film crew had to keep the cabin door open for the light.  Ultimately it took a day and a half for Bjaaland to get it right, and turn right, and the relay began, on February 13, 1952.

For two days the torch was carried—entirely on skis—by 93 renowned skiers or their descendants.  Their identities, like Eigil’s, had been kept secret until they began their leg of the journey.  Waiting patiently inside Bislett Stadium at the appointed hour on February 15 was the 94th, and final torchbearer, Eigil Nansen.  The 20,000-seat stadium was packed with dignitaries, all eager to start the games.  All Eigil needed to do was accept the torch, ski from the entrance to the steps leading to the cauldron, ascend and light the flame, ski around the rest of the inside track, and depart.

What could go wrong?  According to Eigil, “The track I was supposed to use had been wrecked by the photographers, so when I got in there it was all ice.  I was afraid I would capsize like a turtle, in front of all these people.”  Nevertheless, the sequence went off without a hitch, although again, not without its humorous side.  Once Eigil had lit the cauldron, “I skied out the end of the stadium and the doors closed behind me.  One moment everyone was cheering and clapping, and the next I was on the outside of the stadium, all alone with this torch in my hand and not knowing what to do.”

I had the pleasure of meeting Eigil several times before he passed away on February 17, 2017, age 85.  He once explained to me what happened next: “I simply threw the torch in the snow,” he said.

So much for Olympic tradition!

All of the above was indeed captured on film, which can be found here.  The film runs for well over an hour, but the good stuff can be watched in the first 10 minutes (with English subtitles to help understand the narrator).  We see old Bjaaland finally getting his directions correct, although he does seem in a bit of a daze, looked on by a rather bored Olav Tveiten.  Shortly after, a strikingly handsome Eigil Nansen accepts the torch, navigates with intense concentration the uneven snow and ice, and in true Olympic spirit, solemnly ignites the caldron. (The rest of the film makes for great viewing as well–winter sports have come a long way.)

Q: Which country has won the most medals in the Winter Olympics?

Lesson: When it comes to Nordic sports events, don’t mess with Norway!