A Profile in Courage: Louisa Gould

The Place: The island of Jersey, the largest of the so-called Channel Islands.  For centuries the Channel Islands were contested by England and France.  Ultimately, they became part of the Duchy of Normandy—which makes sense—Jersey is but a stone’s throw from the Normandy Coast.  Nevertheless, by the 1259 Treaty of Paris, the Channel Islands were ceded to the British Crown, and to this day they remain a “Crown dependency.” French and British cultural influences are equally strong.

With the fall of France on June 22, 1940, the British government concluded it was impractical to defend the Channel Islands, and German forces occupied Jersey—unopposed—eight days later (June 30, 1940), the only British territory to be occupied by Germany during World War II.

The People: Feodor (or Fyodor) Polycarpovitch Buryi (sometimes spelled Burriy), a 23-year-old Russian pilot shot down on the Eastern Front in October 1941 and sent, along with hundreds of other Russian POWs, to one of many slave-labor camps established by the Germans on the Channel Islands.  As Odd Nansen makes clear in his diary, the life of a typical Russian POW in German hands was nasty, brutish and usually short.  “This [place] is a hell for Russian prisoners.  About fifteen thousand of them have marched through the gate [of Sachsenhausen] from time to time, and there are only eight or nine hundred left in the camp.  The rest have been starved to death, beaten to death or otherwise done away with,” Nansen recorded on Monday, October 11, 1943.

Louisa Gould, a 50-year-old widow.  Louisa ran a small grocery store from her home in St. Ouen, located in the remote northwest corner of Jersey.  Her two grown sons, Ralph and Edward, enlisted in the British armed forces at the start of the war.  In July, 1941 Louisa learned that Edward, an officer in the Royal Navy, had been killed in action when his ship was torpedoed in the Mediterranean. 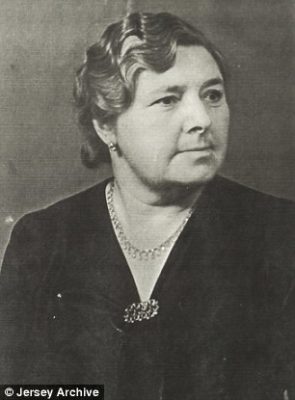 The Action: On September 23, Buryi made good his escape from his slave labor camp; it was his third attempt.  Desperate, filthy, knowing no English or French, Buryi first stopped at the farm of René Le Mottée, who took him home and sheltered him for three months.  Buryi remained hidden with Le Mottée, whose children gave him the nickname “Bill,” until an informer tipped off the German Security Police.  Bill escaped just ahead of his captors, and next headed for the nearby home of Louisa Gould.

Knowing full well the severe punishments meted out for harboring prisoners, Gould nevertheless agreed to take Bill in, observing “I have to do something for another mother’s son.”  For the next 18 months Louisa hid Bill from the Germans, teaching him English as well (although with a French accent to disguise his Russian pronunciation).  In time Bill even began to help out at the grocery store, and his presence became something of an open secret in the local community of St. Ouen.

Louisa clearly was something of a risk taker: In June 1942 German authorities ordered the surrender of all home radios (much like in Nansen’s Norway) — an order Louisa (like Nansen) chose to ignore.   Each night Gould (like Nansen) tuned into the BBC broadcast—inviting her siblings, friends and Bill to listen in as well.  Louisa’s position as a shopkeeper allowed her to pass along pertinent news to her customers.

Much like the family of Anne Frank, Louisa was ultimately betrayed—most likely by a neighbor driven by jealousy, envy, or a desire for better rations or a cash bonus.

Again, miraculously tipped off prior to the arrival of the police, Bill fled to the home of Louisa’s sister, Ivy Forster, and from there another member of the underground, Bob Le Sueur, soon took him to another safe house.  Louisa tried to hide all evidence of Bill’s presence for the previous 18 months, as well as her illegal radio.  Unfortunately, a search of her home turned up the radio as well as a Russian-English dictionary and a gift tag addressed from Louisa to Bill.

The Aftermath: Gould was arrested May 25, 1944 (less than two weeks before the D-Day invasion), and sentenced on June 22, 1944 to two years imprisonment for “failing to surrender a wireless receiving apparatus, prohibited reception of wireless transmission, and abetting breach of the working peace and unauthorized removal [of a Russian POW].” Louisa’s sister Ivy and brother Harold Le Druillenec, along with three friends, were also sentenced to various terms in prison, primarily for listening to the BBC.

Louisa, Harold and a friend named Berthe Pitolet were deported to prisons on the European mainland.  Harold passed through Neuengamme (this was almost a full year before Odd Nansen would arrive), ultimately ending up in Bergen-Belsen.  He would have shared the camp with Anne Frank and Anne’s sister Margot, but unlike them, he survived—but just barely.  Harold was one of only two British survivors in the entire camp.  He would later testify at the Nuremburg trials about the conditions in Bergen-Belsen.

Louisa and Berthe were sent to various transit camps in France before Louisa ultimately arrived in Ravensbrück.  It’s possible that Louisa even crossed paths with Tom Buergenthal’s mother, Gerda, who also was sent to Ravensbrück in the fall of 1944. 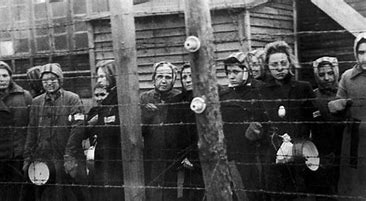 I’ve often written about the role of serendipity—pure luck—in my interactions with Nansen’s diary, and in the lives of many of whom I write (here, here and here).  In the summer of 1944, Louisa and Berthe were held for a short time in a prison in Rennes, France.  During a post-D-Day Allied bombing attack on a nearby rail station, the camp was badly hit as well.  In the ensuing confusion Berthe (who was French) escaped, but was unable to convince Louisa to join her.  Berthe ended up hiding in a nearby town until it was liberated by American soldiers less than one week later; Louisa continued on to Ravensbrück.

In all of my talks about Odd Nansen’s diary, I mention the dangers of entering the camp infirmary, or Revier.  On Monday, October 25, 1943, Nansen wrote: “[W]e’re all of us in constant . . . dread of swelling up in the legs and getting . . . dysentery or some other horror, which will land us in the Revier.  That’s the first step to the crematorium.”

Gould took ill in early 1945 and was taken to the Revier.  She was gassed to death on February 13, 1945, age 53.  Ravensbrück was liberated eight weeks later.

In 2010, Louisa, Ivy and Harold were posthumously named British Heroes of the Holocaust, along with such other notables as Sir Nicholas Winton.  Her story (with typical artistic license) is now the subject of a 2017 film, “Another Mother’s Son,” written by Gould’s great-niece (available on Netflix).

In 1995, on the 50th anniversary of the end of World War II, a memorial plaque in Louisa’s honor was unveiled in St. Ouen.

In attendance at the unveiling was “Bill” Buryi, then age 76.  Bill had remained successfully hidden in Jersey until the end of the war, following which he was repatriated to his native Russia.

On the 75th anniversary of the end of World War II, I salute the bravery of Louisa Gould, René Le Mottée, Ivy Forster, Harold Le Druillenec, Bob Le Sueur, and all the members of Jersey’s underground who, at incalculable risk, saved the lives—not of fellow islanders, or of fellow countrymen, or of co-religionists, but of fellow human beings.

Odds and Ends
Another Mother's Son, Channel Islands, Louisa Gould, Odd Nansen, Thomas Buergenthal, WWII in Jersey
A Surfeit of Books
The Rise and Fall of the Third Reich turns 60