While still in high school I adopted a practice I learned from the father of one of my school friends: writing on the front endpaper of one’s book one’s name and the date they started reading said book.  I later began to add the location where I started reading a book as well.  Thus, at a quick glance I can be transported back to the place and time associated with my memory of the book itself.  (Invariably, the actual date is further in the past than I would have otherwise guessed.)

Eleven years ago today I started reading an old diary written by an unknown (to me) Norwegian.  The book had been hard to come by—there was only one offered for sale that I could find anywhere in the United States; five in the entire globe.  I purchased one of those five from a book dealer in New Zealand.  The name of the book was From Day to Day.  Indeed, my only familiarity with the book came from a brief, footnoted mention of it in a memoir written by Thomas Buergenthal, A Lucky Child, that I had read earlier that year.

With no preconception of what might lie within, and a bit put off by the diary’s length—over 500 pages—I made an initial decision to proceed rather deliberately.  I would read only one diary entry per day—sort of like a daily devotional—and thereby walk in the footsteps of the diarist as he recorded his experiences each day.  Soon that discipline gave way to two diary entries per day, and then three, and then more.

By that time, as I inform my audiences, I was hooked.

And the rest is history.  Exactly when I made the fateful decision to edit and republish Nansen’s diary is now a bit fuzzy, but clearly it occurred by year-end.   In early 2011 I visited Washington, DC to research the book’s copyright status at the Library of Congress, and to meet Tom Buergenthal for the first time.  After we discussed Tom’s memoir, and he showed me his shelf full of the many different translations of his book (17 at the time I recall), I tentatively mentioned my plans to get Nansen’s diary back into print.  Tom could not have been more supportive and encouraging, even writing a letter of introduction to Odd Nansen’s daughter Marit, thereby facilitating what became another wonderful friendship. With Tom’s blessing I was ready to tackle the project that would change my life in so many rewarding and delightful ways. 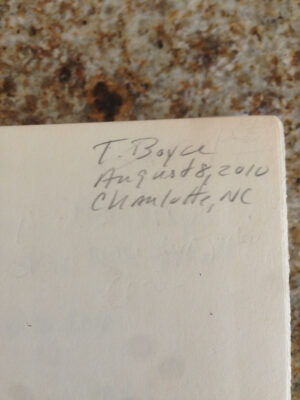