May 10th in History

Some dates in history just seem to be more fraught with meaning than others. Take, for instance, May 10.

So many things happened on May 10 relating to World War II that it’s difficult to describe them all.  Here’s a brief rundown:

May 10, 1933: On the 101st day of Hitler’s new Nazi regime, Nazi-dominated university groups undertake an “Action Against the Un-German Spirit.” That is, they draw up a blacklist of all authors whose books are “anti-patriotic,” including prominent Jewish, liberal and leftist writers.  On the night of May 10, those books are consigned to bonfires.

The students were ecumenical in the targets of their rage.  Authors ranged from Erich Maria Remarque to Ernest Hemingway to Sigmund Freud to James Joyce to Leo Tolstoy to Albert Einstein to F. Scott Fitzgerald to Joseph Conrad to Herman Hesse to Victor Hugo to H.G. Wells to Jack London.  Even Helen Keller was deemed a threat to the Nazi regime.

One eyewitness, the French Ambassador to Germany, Andre Francois-Poncet, described the scene: “a fleet of trucks made for University Place, the student chauffeurs singing to band music as they crossed [Berlin]; 20,000 volumes were heaped upon the pyre, their titles proclaimed as fast as the books were tossed into the fire; firemen poured gasoline on the flames while Goebbels, presiding over the assembly, orated.”

Time magazine referred to a “Bibliocaust” and Newsweek termed the event a “Holocaust.”  According to historian Peter Fritzsche, this is believed to be the first use of the term “Holocaust” in the context of the Third Reich.  Perhaps unwittingly, the editors at Newsweek were on to something.  They may have been aware of 19th Century German poet Heinrich Heine, but may not have been aware of what he wrote back in 1820-21: “Dort, wo man Bücher verbrennt, verbrennt man am Ende auch Menschen.” [Where you burn books, you will end up burning people.”]

I leave the final word on this episode to President Franklin D. Roosevelt, who observed this about book burning: 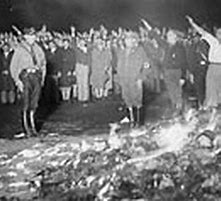 May 10, 1940: Germany attacks Belgium, Netherlands, and France, the beginning of their offensive to subdue their western front as a prelude to attacking the Soviet Union. Simultaneously, British Prime Minister Neville Chamberlain resigns and is replaced by Winston Churchill.  Churchill retains his portfolio as Minister of Defense as well. Three days later, in his first address to the House of Commons as Prime Minister, Churchill informs the beleaguered British people “I have nothing to offer you but blood, toil, tears and sweat.” 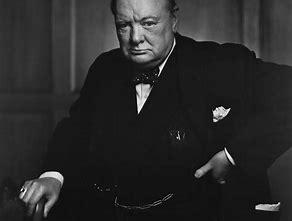 May 10, 1941: On the date Hitler had originally planned to invade Russia, Deputy Führer Rudolf Hess flies to Scotland and parachutes down near the home of the Duke of Hamilton in an attempt to negotiate a peace deal with Britain.  In retaliation, Hitler sends one of Hess’s assistants, who had supplied him with astrological predictions (which Hess was fond of), to Sachsenhausen (he was released in March 1943, months before Odd Nansen would arrive).

May 10, 1945: Two days after the official end of World War II, German forces in northern Norway court-martial and execute four German soldiers for mutiny.  When the war ended on May 8, members of the 4th Battery of the 118 Artillery Regiment of the 6th Mountain Division greeted the news with relief.  After all, they had survived a conflict which had killed millions of their compatriots.  The commanding officer of the 118th, however, ordered the soldiers to continue fighting.  The soldiers decided to mutiny instead and escape to Sweden, only 10 miles away.  In the course of the mutiny a rogue NCO shot and killed two officers.  The mutineers broke into two groups, of 48 and 11 men, respectively, and headed for the border.  The group of 11 was intercepted by other German troops, and immediately tried.  Five soldiers were given prison sentences, two acquitted, and four blindfolded, tied to stakes, and executed.   The commanding general, Ferdinand Jodl, personally ordered the execution of the offending soldiers.  Jodl’s older brother, Alfred Jodl, would later be convicted at Nuremburg of crimes against humanity, and executed in 1946. 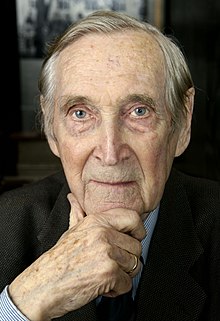 Sønsteby, who would receive Norway’s highest military decoration for his resistance work (the War Cross with Three Swords), almost wasn’t accepted into the SOE (Special Operations Executive).  Even without any military training, he had played an important early role in the Norwegian resistance, but when he escaped to Britain to develop his skills further, he failed to excel and was nearly rejected as unsuitable.  It took the personal intervention of John S. Wilson, the head of the Scandinavian section of the SOE, to prevent him from being dropped.  Later, the SOE’s Norwegian section history would describe him as “the most intelligent, most efficient and most productive agent in all Norway.”  The group he headed, the “Oslo Gang,” which included Max Manus, was considered the best team of saboteurs in Europe.

On May 2, 1945, just days before the War ended, Sønsteby carried out the most important—and brazen—operation of all.  Eleven members of the Oslo Gang bluffed their way into the Ministry of Justice and the police headquarters and made off with two and a half tons of files, which would prove invaluable after the War in bringing Vidkun Quisling and his collaborators to justice.

For those of you watching Atlantic Crossing on PBS, you might be interested to know that Sønsteby led the cortege when Crown Prince Olav, the first member of the Royal Family to return from exile, arrived in Oslo on May 13, 1945.  A month later he served as the Crown Prince’s bodyguard when King Haakon VII and the remainder of the Royal Family returned to Oslo as well.

On a trip to Oslo in early 2012, just months prior to Sønsteby’s death, I visited Norway’s Resistance Museum (Norges Hjemmefrontmuseet) in Oslo.  While in their gift shop I saw a newly published biography of Sonsteby, in Norwegian, signed by him.  I was contemplating purchasing the book, even if unreadable to me, just for the signature alone, when the museum clerk asked if perhaps I would like to meet Mr. Sønsteby in person; he was visiting upstairs in the archives that very day.  [Serendipity again!].  My wife, son, and I had a delightful conversation with Sønsteby, very erect and perfectly attired in a suit and tie, together with his charming wife.

At one point toward the end of our conversation, Sønsteby asked me if I had read his own memoir, Report From # 24, which had long been available in an English translation.  I informed him that indeed I had.

In response, he leaned over, closer to me, and confided in a conspiratorial whisper: “I loved every minute of it.” 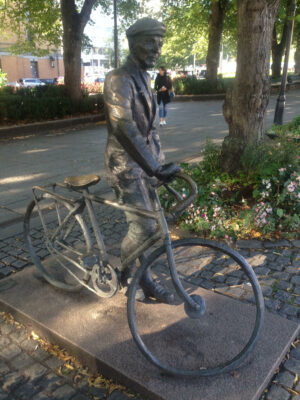 Memorial statue of Sønsteby in downtown Oslo. Unveiled by King Harald on 13 May 2007